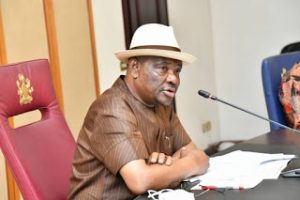 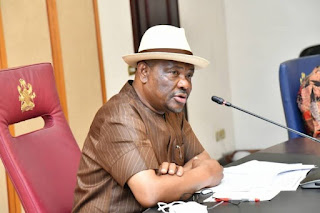 Governor of Rivers State, Nyesom Ezenwo Wike says no financial bank will be allowed to frustrate or delay delivery time of any development projects of his administration in the state.

The governor was reacting to complaints that some financial banks that receive money and handle various payment schedules for his administration often fail to release agreed contract sum to contractors.

Speaking at the flag-off ceremony for the construction of Aluu -Omagwa Road on Saturday, Wike said the state government will not hesitate to terminate any contract it has with such financial banks.

“Part of the problems we have is the banks. When you give contractors money, the banks will make sure that they delay release of the money.

“The next time any of our contractors complain about their funds not being released to them, that will be the day we will terminate any relationship we have with them.

Wike stated that he has fulfilled every promise made to the people of Ikwerre Local Government Area that included schools and roads.

Having received such measure of development projects, Wike urged them to stop being politically naive particularly when it comes to giving more votes to the peoples Democratic Party (PDP).

“Frankly speaking, what’s important is that nobody will now say that we have not been able to touch Ikwerre Local Government as it is. We have, and nobody can deny that fact.

“All these things I have done without giving excuses. But when it is your turn, you’ll say they came and carried your results away.

“Stay and defend your votes. It is a challenge to Sir. Celestine Omehia, Chris Orji and Samuel Nwanosike, all of you.

“I do know that all of us have agreed to do this together. Therefore, whatever promise we have made as a party, and as an administration, we have no excuse but to fulfill the promise that we have made to you.”

Performing the flag-off, former Deputy Governor of Rivers State, Engr. Tele Ikuru described governor Wike as a champion who puts the interest of the state above all other considerations.

“A people deserve the kind of leadership they get. In 2015, we were offered two choices; a champion and an accredited stooge. We selected you the champion.

“Between the time you’ve come to government and today, it is one project or the other. It is either you’re commissioning or flagging off project.

“You have shown your love for this state numerously. For everything that you discuss with any person anywhere and place, you will discuss the interest of Rivers people into it.”

In his description of the Aluu -Omagwa Road project, Rivers State Commissioner for Works, Elloka Tasie-Amadi said the road will be reconstructed into a 9.82km long and 9.3km wide.

According to him, the road will bring transportation access, serve as alternative route to Omagwa and the Port Harcourt international Airport while also attract numerous benefits to the host and adjoining communities.

On his part, the chairman of Ikwerre council, Hon. Samuel Nwanosike, thanked the governor for the numerous projects his administration has executed in the council.

He stated that when the road is completed, it will boost the economic fortune of farmers who will be able to take their produce to markets in Port Harcourt and other parts of the State.