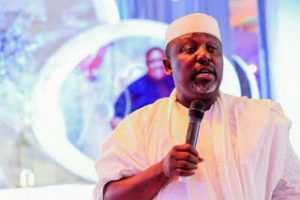 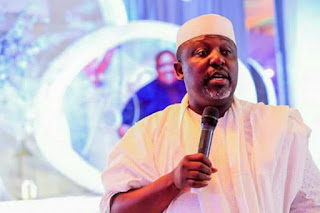 Senator Rochas Okorocha has raised the alarm over plots by the Uzodimma government and the police to indict him over attacks on police stations and other public facilities in the state.

The former governor raised the alarm in a statement by his spokesperson, Sam Onwuemeodo.

Okorocha accused the state police command of playing the script of the state government, adding that his detained associates were not involved in the April 5 attacks.

He called on the Inspector General of Police, Usman Baba to takeover the case file of two of his associates detained at the facilities of the state command headquarters in Owerri.

“We knew and still know that their  arrest was part of  the relentless effort to add non-existent flesh to the mentioning of Senator Rochas Okorocha by the state  government 24 hours after the police headquarters and correctional centre, Owerri, attacks happened.

“With all these lies, we could only situate the arrest, detention and subsequent parading of Ojukwu Ukonu and Ugbor Casmir in the desperate effort to justify the state government’s hasty mentioning of Okorocha when the Owerri attacks took place, without waiting for the investigation into the ugly incident by relevant security agencies to even commence”.

Imo State government in a response to Okorocha’s alarm said the former governor should let the police conclude investigation instead of politicising the case.

Mr Declan Emelumba, Imo State commissioner for information said, “If he (Okorocha) said the police arrested two of his associates, there must be a reason for that. So, as a law-abiding citizen, what is expected of him is to expedite action on their investigation and if his associates are indicted, then they stand indicted; if they are not indicted, they will be released. As they say, a clear conscience fears no accusation; so, if his hands are clean, I don’t think he has anything to worry about.”

Abutu Yaro, the state commissioner of police also said they were sticking to professionalism and absolute respect for human lives.