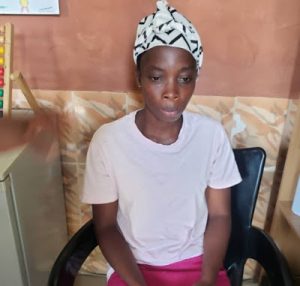 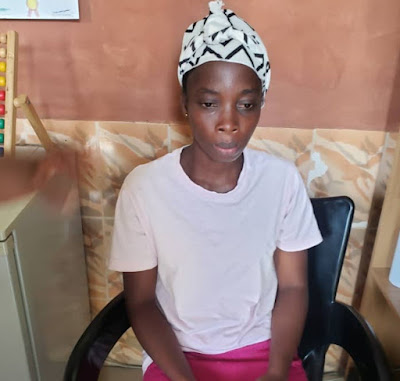 Following the hijacking of a school bus in Ondo State on Thursday, the school attendant who was abducted with the bus has recounted her ordeal after she was released by her abductors.

The bus attendant, Omolayo Ojo said she was in the bus alongside the driver to pick the first pupil when the incident happened.

Panic had earlier engulfed the state in the early hours of Thursday after some gunmen hijacked a branded school bus belonging to Chimola Nursery and Primary School, Oba-Ile Housing Estate, Akure North Local Government Area of the state.

While narrating that the three fully armed gunmen had been trailing them, Omolayo said they made the move while the bus was making a u-turn in front of the house where the first pupil was to be picked up.

Omolayo added that following the attack, the gunmen dropped off the driver and took her away while the bike rider went away the bike.

“When we were on our way to pick our first pupil this morning. We saw an okada rider behind us. They were three of them. When I noticed that they were riding the okada very rough, I told the driver not to engage them in any argument as regards the rough riding.

“As two of them came down from the bike, I saw gun and axe. I immediately told the driver that we should immediately use the vehicle’s child-lock so that they won’t be able to open the door from outside. At that point, they pointed their guns at us and asked us if we need our lives. We now opened the door and they dragged the driver out and told him to lie down. The other one now pinned my head down in the bus and told me that if I need my life I should corporate with them.

“While they were taking me away, they started asking me questions. They asked for my name and I told them. They asked of my mother, I told them that she was dead and that my father is still alive. They now told me that they will not kill me that I’m innocent but I should corporate with them and that I must not shout.

“I don’t even know where they drove me to. But on getting to a very thick part of the bush they now pushed me down. They said I should be running and that I must not look back. So, I kept running without looking back. When I got to a point where I could no longer hear the sound of the bus and now started walking until I was able to get to a particular junction.

“On getting to the junction, I became confused on which direction I should take. When I couldn’t make up my mind, I started shouting. I saw an elderly woman and I approached her to explain all that happened to her. She was the one who now told me that I’m between Ikota and Ilara-Mokin. She now told me to move forward that I’ll get to a major road. But on getting to the road, none of the vehicles I pleaded with stopped to assist me.

“It was an okada man who later stopped and took me to Ilara-Mokin and gave me N500 that I should find my way to Akure. A chief in Ilara-Mokin later told a bike to take me to Akure. They did not touch me.”