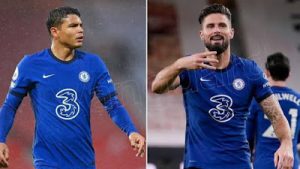 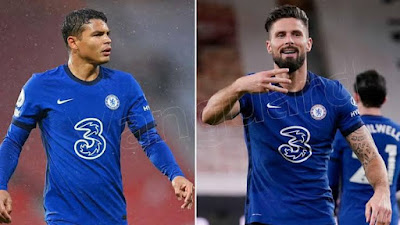 Chelsea defender, Thiago Silva and striker Olivier Giroud have extended their contracts with the London club by one year.

It takes Silva’s time at Stamford Bridge into a second season.

The Brazilian enjoyed a successive first season at the club after he arrived on a free transfer from PSG.

The 36-year-old featured 34 times in all competitions for the blues and scored twice.

Chelsea director Marina Granovskaia who was excited about the renewal said: “When we brought Thiago Silva in last summer, we knew we were adding a world-class player to the squad.

“Thiago has duly shown everyone at Chelsea his immense quality throughout this season, and he has had a huge influence on and off the pitch for us.

Thiago Silva’s new deal will run until the end of the 2021/22 season when Chelsea will be looking to defend their European crown as well as challenge for domestic honours.

Chelsea also confirmed on its website that Frenchman Giroud extended his contract with the club by one year.

The Frenchman’s current deal was due to expire at the end of this campaign but an extension means the 34-year-old’s three-and-a-half-year stay in west London continues for another year.

Since his move from Arsenal, Giroud helped the Blues secure three major honours.

Chelsea director Marina Granovskaia described Giroud as a crucial part of so many big moments for the club.