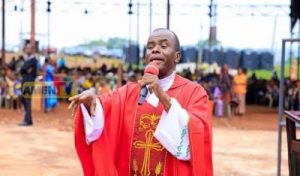 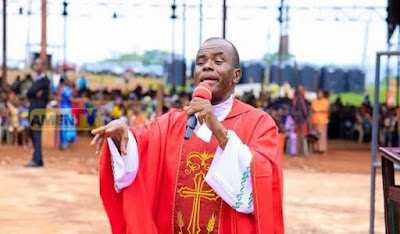 The founder and Spiritual Director of Adoration Ministries Enugu, Reverend Father Ejike Mbaka, has vowed never to be silent over insecurity in the country.

Mbaka said he would continue to speak out against insecurity and killings in the country.

In a statement after addressing followers at the Adoration ground yesterday, the outspoken clergyman insisted that nobody’s blood was worth being shed.

According to Mbaka: “Those who think Mbaka will be quiet, you are wasting your time. Do you know how many people have died within one month in a country like this, how much blood has been shed? They cannot ask me to keep quiet. No blood is worth being shed.”

Callistus Onaga, Catholic bishop of Enugu diocese, in a letter to the priest also converted the adoration ministry to chaplaincy.

Despite the ban, the fiery priest had on Sunday resumed his Adoration Ministry on Sunday after serving a 30-day ban.

Despite a directive from Onaga, the priest had alleged a plot by the Department of State Services, DSS, to arrest him.

Mbaka raised an alarm that the DSS summoned him.

He made the claim while addressing his followers at the Adoration Ground in Enugu on Sunday.