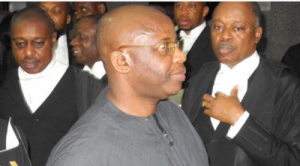 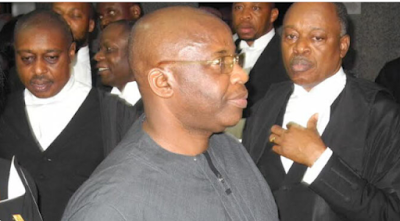 The Attorney-General of the Federation AGF and Minister of Justice, Abubakar Malami SAN and the Inspector General of Police IGP Isman Baba Alkali are reportedly embroiled in a power tussle in the trial of former Imo State Governor Ikedi Ohakim.

Ohakim is facing trial at the federal high court in Abuja over an allegation that he threatened to release a nude photograph of an Abuja based woman, Mrs Chinyere Amuchienwa.

The office of the Inspector General of Police filed the criminal charges.

Trouble, however, broke out in court on Thursday when police applied to Justice Taiwo Oladipupo Taiwo to withdraw the charge they brought against Ohakim.

In the drama that ensued, the AGF surface and vehemently opposed the move by Police to terminate the charge.

Instead, the AGF announced a decision to formally take over the trial of the former governor.

AGF’s counsel, Bagudu Sani told the court that the police, which filed the charge against Ohakim, had also transferred the case file to the office of the AGF after a notice of discontinuance in the matter

Upon receipt of the case file, Bagudu said the AGF filed an affidavit of compliance on July 2, 2021, to take over the trial of the former governor for the alleged offence.

But in her argument against the bid by the AGF to take over the matter, Police lawyer, Rufus Dimka said the Police had filed a complainant/applicant’s counter-affidavit on March 30, 2021, in opposition to the AGF

Dimka urged Justice Taiwo to allow the police to terminate the case, strike out the charge and bar the AGF from taking over the matter

Supporting the Police, Emeka Etiaba (SAN), representing the former governor opposed the request by the AGF to take over the matter.

He prayed the court to dismiss the application by the AGF, adding that the content of the affidavit of compliance by the office of the AGF does not in any way affect the consequence of the notice of withdrawal of the charge against the former governor and urged the court to strike out the charge.

After listening to submissions by parties, Justice Taiwo adjourned till September 27, 2021, to rule on whether to strike out the charge or allow the AGF to take over.

Police had in the charge marked FHC/ABJ/CS/287/2020, named the former governor and one Chinedu Okpareke as defendants.

They were alleged to have threatened to release a nude photograph of Amuchienwa if she fails to drop charges of attempted kidnap against them.

In the five-count charge dated November 25, 2020, the Police alleged that Ohakim and Okpareke, knowingly and intentionally transmitted communication through a computer system to harass and bully Amuchienwa, an offence that is punishable under Section 24(1)(a) of the Cybercrime Act 2015.