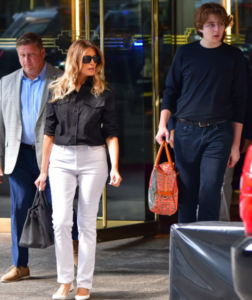 Barron Trump was seen towering over his mother, Melania, on Wednesday as the mother and son duo left Trump Tower, where the former first family has been staying while in New York.

She wore a fashionable black button-down shirt with white pants that she paired with $645 Christian Louboutin pointy-toe flats, while Barron wore a plain black shirt tucked neatly into his blue jeans.

The former president is reportedly either 6-foot-3-inches or 6-foot-2-inches, according to the International Business Times, while Melania, a former model, stands at 5-feet-11-inches.

Just last year, the International Business Times reported that Eric was the tallest of all the Trump children at 6-ft-5, but that has clearly changed with Barron’s most recent growth spurt.

Rosy Meurer Flaunts Her Enviable Postpartum Body In New Photos   Actress Rosy Meurer has taken to her Instagram page to...