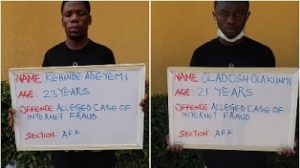 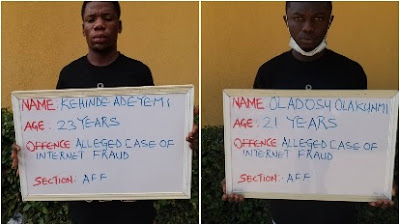 Two University students were jailed on Friday by a Kwara State High Court sitting in Ilorin, for offences bordering on cybercrime and romance scam.

They were arraigned on separate charges on Friday by the Ilorin Zonal office of the Economic and Financial Crimes Commission, EFCC.

Adeyemi, alias Queen Elizabeth, was charged on one count, while Oladosun was arraigned on three counts by the anti-graft agency before Justice Sikiru Oyinloye.

The two defendants in their separate pleas, pleaded guilty to the charges against them.

Upon their pleas, the prosecuting counsel, Sesan Ola, reviewed the facts of the cases through Lamidi Olarenwaju and Enoch Onyedikachi, who testified against the two convicts.

The two witnesses who are operatives of the commission, told the court how intelligence reports led to the arrest of the convicts at the Ilorin International Airport.

They tendered several fraudulent messages printed from their email addresses, the confessional statements of the defendants and the iPhones used as instruments of the crime, which were admitted in evidence by the court.

In his judgement, Justice Sikiru Oyinloye, said the court was convinced that the prosecution had proved its case beyond reasonable doubt, going by the plea of guilt entered by the defendants, and the unchallenged evidence of the prosecution.

The judge, thereafter, pronounced Adeyemi guilty and sentenced him to one year imprisonment with an option of N100,000 fine while ordering the forfeiture of his iPhone to the Federal government.

In the case of Oladosun, he was sentenced to one year imprisonment on counts one and two, which will run concurrently or a fine of N100,000 each on the two counts.

On count three, Justice Oyinloye, only ordered Oladosun to pay a fine of N20,000 with no custodial sentence.

Additionally, the court also ordered the forfeiture of a N209,000 draft raised in Oladosun’s name and his iPhone to the Federal government.

The charge sheet of Adeyemi Kehinde, indicated that in February 2020, in Ilorin, he dishonestly involved one Miller, a white man to send him card worth 400 US dollars, when he knowingly pretended to be a white lady called Queen Elizabeth Toha, who was in love with him, a representation he knew to be false as contained in his Google voice and Google Hangout linked to his Gmail account, queentoha18@gmail.com, and thereby committed an offence contrary to and punishable under Section 324 of the Penal code of Northern Nigeria.

On Oladosun Olamilekan, (Joan Davis), he allegedly in March 2018, in Ilorin did cheat by personation when he pretended to be one Mike Storey, a white male with Gmail account mikestorey948@gmail.com and fraudulently deceived one Vicki Baldwin to send 300 US dollars worth of iTunes gift card and thereby committed an offence contrary to Section 321 of the Penal code and punishable under Section 324 of the same Penal code.