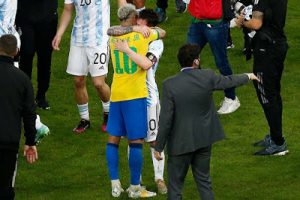 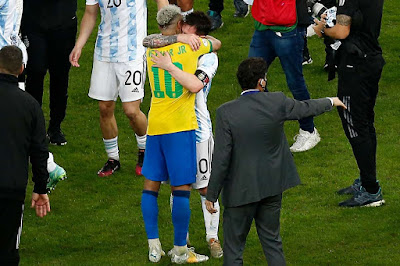 Argentina captain, Lionel Messi, and Brazil forward, Neymar, were involved in an emotional embrace after the Copa America final on Sunday.

A first-half Angel Di Maria goal, clinched a 1-0 win at the Maracana Stadium.

It was enough to see La Albiceleste win their first piece of silverware since 1993 and Messi claim his first trophy for his country.

There were scenes of ecstasy after full time, as the whole Argentina team ran to Messi to celebrate the feat.

But on the other side, Neymar was left in tears, as he once again failed to inspire his Brazil team to glory.

Messi and Neymar played together at Barcelona for four seasons, and are believed to still have a close relationship.

And before the trophy was presented, the two players hugged for around 30 seconds, and whispered to each other while Messi’s teammates jumped around them with joy.