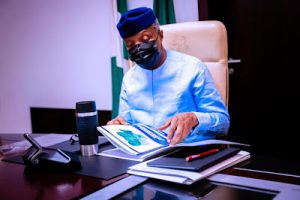 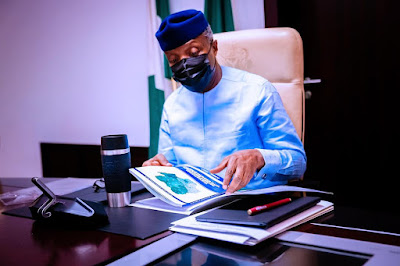 VP Yemi Osinbajo has said the Federal Government look for the right type of investors in its privatization and commercialization efforts.

According to Osinbajo, the federal government going forward is poised to “looking out for the right models, the right type of investors and also looking at funding for these investors over an extended period of time.”

Osinbajo also restated the FG’s strong commitment towards infrastructural and national economic development, and urges local investors and the international investment community to take advantage of the many opportunities offered by the Nigerian economy,

Some of these areas include the country’s tax credit initiatives to promote infrastructural development, as well as, the ongoing reforms in the telecommunications, port, and power sectors.

The Vice President who is also the Chairman of the National Council on Privatization stated this on Tuesday at the one-day investors’ webinar organized by the Bureau of Public Enterprises (BPE) in collaboration with the Nigerian Exchange Group and Nigerian Investment Promotion Commission (NIPC), with the theme: Showcasing Investment Opportunities in the Federal Government of Nigeria’s Privatization and Economic Reform Programme.

Delivering the keynote address and declaring the Webinar open, the VP who noted that the webinar was an important platform to draw attention to investment opportunities for Nigeria’s local and foreign friends and collaborators, added that the Buhari administration places a premium on mobilizing private capital and participation for improving efficiency and driving economic growth.

According to him, “the Federal Government of Nigeria is strongly committed to this approach to national economic development and we consider it an important duty to create the enabling environment for the required and much-needed investment input.”

Osinbajo noted that past sector reforms in Nigeria have brought about increased opportunities and extensive economic and social gains, including in the pension scheme, telecommunications, port, and power sectors.

“For example, our pension reform, which replaced the old defined benefit scheme with the contributory pension scheme led to the creation of the Pension Commission (PENCOM) which now has over N12.3 trillion in pension fund assets.

“Similarly, the reforms of our telecommunications sector increased the number of telephone lines in the country from about 450,000 in 2001 to currently well over 140 million active telephone lines and 97.9 per cent teledensity.

“Equally notable is our port sector reform which led to the concession of various terminals, bringing about major investment and transformation of the various port terminals including in revenue, employment and operational efficiency,” Osinbajo said.

He emphasized that, despite the challenges, the Buhari administration remains committed to improving the country’s infrastructure and power sector, stating that “the Federal Government is working with key stakeholders in the sector to address some of the various challenges impeding its growth.”

According to him “our experience with the power sector underscores the importance of using the right moments in attracting investment, especially in the provision of infrastructure. And what we have seen is that while you are privatizing utilities of the size of our former Power Holding Company of Nigeria (PHCN), we simply have to be far more intentional in looking out for the right models and the right type of investors and also looking at funding for these investors over an extended period of time.”

In the area of infrastructure, Prof. Osinbajo noted that “a major challenge of the Nigerian economy is its limited infrastructure stock, which is estimated to be about 35 per cent of GDP, as compared to 70 percent of GDP in peer countries.”

He added that “it is clear that there is a shortfall there and given the limited resources of government, government alone cannot provide the financial outlays needed to meet the very huge infrastructure deficit there is and the needs of the economy.”

Underscoring the importance of the Public-Private Partnership model in promoting infrastructure development and driving economic growth, the Vice President highlighted the success being recorded by the administration’s tax credit initiative, especially in the area of road construction.

“Today, several road projects that may have presented funding difficulties for the government have been done under a scheme that allows private entities, especially private entities that are corporate organizations in Nigeria to build, while government forbears on taxes they would have paid to the extent of their financial outlays on the infrastructure.

“For example, today, the NLNG is building the Bodo-Bonny Road and Bridge, and this is a huge project, almost N200 billion, and it is building it on that tax credit basis. Also, Dangote built the Obajana-Kabba road in Kogi State on that basis and is currently doing the Apapa-Oworonshoki road in Lagos, also on this tax credit basis.

“What this means is that if a private entity is prepared to build or participate in the building of government infrastructure, such a private entity would get a tax rebate or tax credit for the amount of money spent. Of course, these would have to go through the normal approvals and all that. This has proven to be very successful.”

Prof. Osinbajo further explained FG’s approval for the establishment of a N15 trillion Infrastructure Development Company (InfraCo) as another indication of the Buhari administration’s commitment to infrastructural development nationwide.

According to the VP, “the Federal Government, through the Central Bank of Nigeria, the NSIA and the Africa Finance Corporation, among others, collaborating to establish a N15 trillion infrastructure fund under the auspices of an InfraCo “is one among many exciting possibilities that will open several doors for infrastructure investment in Nigeria.”

“We believe that given the credibility of the actors – CBN, NSIA, AFC, and the quantum of resources that will be deployed, the InfraCo will make a major contribution to meeting the infrastructural needs of the Nigerian economy while promoting Public-Private Partnerships,” the Vice President added.