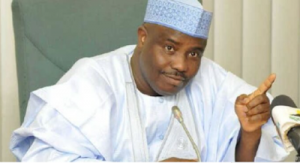 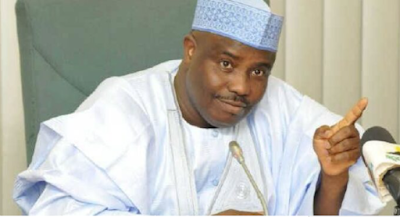 Aminu Tambuwal, governor of Sokoto state and former speaker of the house of representatives, says empowering the Nigerian Communications Commission (NCC) to determine electronic transmission of election results is unconstitutional.

On Thursday, the senate finally passed the electoral act amendment bill after the contentious issue of the transmission of election results electronically was debated.

During the clause-by-clause consideration of the bill, Sabi Abdullahi, deputy senate whip, proposed that the NCC must certify that national coverage is adequate and secure, while the national assembly must approve before the Independent National Electoral Commission (INEC) can transmit election results.

But Albert Bassey, senator representing Akwa Ibom north-east, kicked against the idea and said the initial proposal made by the committee should be retained.

After a rowdy session and using a “division” voting method, the senate eventually retained Abdullahi’s amendment after a 52-28 vote.

In a statement, Tambuwal said the decision on electronic transmission of result must be left with INEC.

“The decision of the Senate to subject INECs constitutional power to conduct elections to the Nigerian Communications Commission (NCC), and National Assembly is patently unconstitutional,” the statement reads.

“For the avoidance of doubt, S.78 of the Constitution provides that “The Registration of voters and the CONDUCT of elections shall be SUBJECT to the DIRECTION and SUPERVISION of Independent National Electoral Commission”. In Third Schedule, Part 1,F, S.15: INEC has power to ORGANISE, UNDERTAKE and SUPERVISE all elections. The Constitution further provides that INEC OPERATIONS SHALL NOT be subject to the direction OF ANYBODY or AUTHORITY.

“Unquestionably, the mode of election and transmission are critical parts of the CONDUCT, SUPERVISION, UNDERTAKING and ORGANISATION of elections in Nigeria. Of course the National Assembly has power to flesh out the legal framework but that has to be consistent with the Constitution.

“These constitutional powers have been solely and EXCLUSIVELY PRESCRIBED BY THE CONSTITUTION to INEC, and CANNOT BE SHARED WITH the NCC, or any other Authority, and certainly not a body unknown to the Constitution. The Senate decision to subject INECs constitutional power to conduct elections to NCC is consequently patently void, unconstitutional and unlawful.

“We had earlier counselled that that the mode of conducting elections and in particular the transmission of votes be left with INEC who would monitor developments and determine at every election the type of technology to be deployed to ensure free, fair and credible elections.

Tambuwal said if INEC determines that electronic transmission is not possible in any part of the country, it would, by regulations, determine the appropriate thing to do.

He, however, commended the house of representatives on its “wise” decision to call on INEC to address the country on its readiness to deploy electronic transmission technology for elections in 2023.