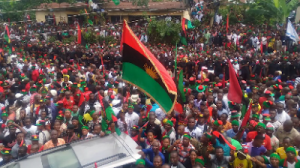 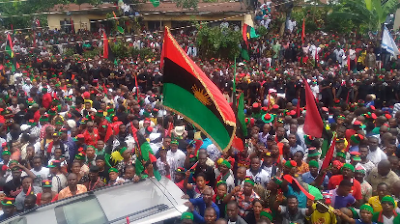 The Police Command in Enugu State has warned members of the Indigenous People of Biafra, staging a sit-at-home protest today.

Likening them to enemies of public peace, the police warned them to steer clear of the state or face the full wrath of the law.

The command also reiterated its resolve to collaborate with security agencies and peace-loving citizens to adequately provide public security and safety, enforce and maintain law and order.

The command’s Police Public Relations Officer, ASP Daniel Ndukwe, made this known in a statement issued on Monday in Enugu.

According to Ndukwe, “The command enjoins peace-loving citizens of the state to go about their lawful businesses.

“Residents should disregard sit-at-home orders not issued or approved by any statutorily recognised organ or authorised Ministry, Department or Agency (MDA) of government.

“This includes one purportedly restricting public movements and businesses on Monday, Aug. 9 by pro-Biafran groups.

“Accordingly, any individual or group(s), who may want to hide under the guise of such illegitimate order to foment trouble in the state have been warned to desist forthwith.

“As anything in the contrary will be vehemently resisted and handled in accordance with the law.”

The police spokesman also urged the residents to remain vigilant and promptly report acts of criminality or breach of public peace to the nearest police station.