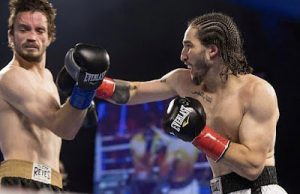 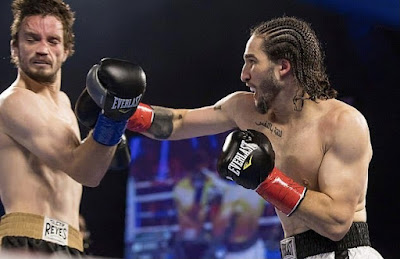 The fight was staged at Oklahoma, on Saturday Night as Nico finished off Jordan in the first round.

Ali Walsh, who wore trunks made for his grandfather, left Jordan on the floor twice in the first two minutes of the fight and claimed victory by TKO before the first round was out.

In his post match interview, the 21-year-old said “It seems like a lot of pressure but, to me, he’s just my grandfather. To the crowd he is the greatest fighter who ever lived and maybe the greatest person.

“To me? He’s the greatest grandfather!”

“I’ve been thinking about him so much. I miss him.”

Ali Walsh has signed a multi-fight deal with Top Rank Boxing, owned by legendary promoter Bob Arum, and has secured an endorsement deal with Everlast.

He estimated he had about 30 amateur fights before he decided to turn pro after spending a few months working with notable trainer Abel Sanchez in Big Bear, California. After signing with Top Rank Boxing, Ali Walsh began working with SugarHill Steward, who trains heavyweight champion Tyson Fury.