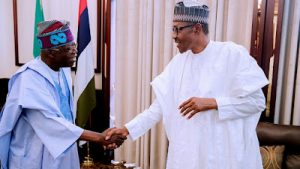 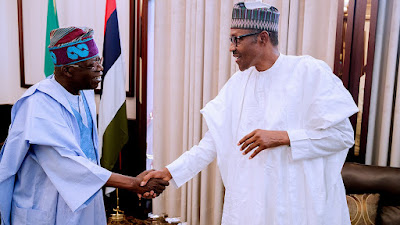 The presidency has said the visit of President Muhammadu Buhari to Asiwaju Bola Tinubu in London was not to support his 2023 presidential ambition.

The president paid a surprise visit on Tinubu in London last Thursday with several pictures of the visit hitting social media, eliciting lots of reactions.

Presidential spokesman, Femi Adesina, who appeared on Channels TV’s Politics Today, said Tinubu had been in London at the same time the president was there.

He said there had been lots of reports on social media about Tinubu’s health and that the president’s visit was simply on goodwill basis.

According to Adesina, the president still has two years less three months in his tenure of office and that to start supporting somebody now would just be like jumping the gun which Buhari would never do.

He said before the 2019 elections, people began to campaign for Buhari before INEC blew the whistle for the campaign to start.

Adesina said Buhari was the one who came out to say that he would not jump the gun.

He said the President would dare not jump the gun in terms of supporting one candidate or the other.

Adesina recalled that Buhari had said anybody who wanted to be President after him should go out and work.

He said that meant that the President might not be supporting anybody until maybe a candidate of the party emerged.