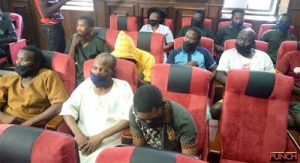 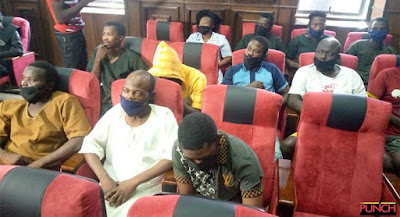 A judge of the Federal High Court in Abuja is expected to sign a release warrant of the 12 detained aides of Yoruba Nation agitator, Sunday Adeyemo, popularly known as Sunday Igboho.

The detained aides, it was learnt, have met all their bail conditions.

It was gathered that the detainees’ lawyer, Pelumi Olajengbesi, approached the bail office of the court on Tuesday to assign another judge to sign the release warrant of his clients who have been detained in the custody of the Department of State Services for about 50 days.

Olajengbesi said the bail office of the court earlier informed him on Tuesday that the presiding judge of the case, Justice Obiora Egwuatu, travelled out of the country on a short notice.

The lawyer told newsmen on Tuesday that Justice Egwuatu was supposed to sign the release warrant of his clients on Tuesday but for his sudden trip.

The court had asked each of the 12 detainees to get two sureties, making it a total of 24 sureties.

The detainees had secured the sureties last week, but the bail office of the court said it needed to write letters to the offices of the 24 sureties to get more confirmation.

Olajengbesi said the confirmation of the sureties had been completed, adding that he was at the bail office of the court on Tuesday waiting for the judge to sign the release order of his clients, but was told that Justice Egwuatu had travelled.

“We have met all the bail conditions and the deputy registrar at the bail office has signed a memo to that effect. However, I was told by the bail office that the judge that will sign their release order has travelled out urgently for a seminar and will not return till next week,” the detainees’ lawyer told our correspondent.

“We have made efforts to reach out to another judge today and the judge gave us an appointment for tomorrow. We are hopeful that the judge will sign it. We do not think that it is a ploy to frustrate us,” Olajengbesi said.

DSS operatives had arrested the 12 persons on July 1, 2021, during a raid on Igboho’s Ibadan residence around 1am.

DSS spokesman, Peter Afunanya, had said the secret police killed two other associates of the activist in a “gun duel”.

The 12 detained persons had approached the court through their lawyers led by Olajengbesi to seek their release in line with their fundamental human rights.