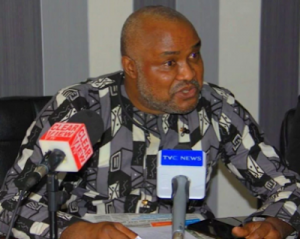 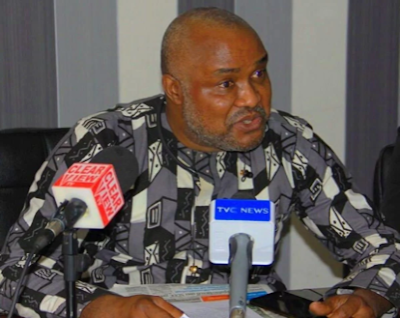 Human Rights Writers Association of Nigeria, HURIWA, has described as worrisome, the dangerously declining state of security in the country.

HURIWA cried out over the increasing spate of absolute lawlessness by operatives and officers of the various law enforcement agencies in the county.

Addressing a press conference in Abuja on Tuesday, the national coordinator of HURIWA, Emmanuel Onwubiko, the human rights group especially mentioned the Nigeria Police Force; the States Security Services, SSS; the Economic and Financial Crimes Commission, EFCC, and the military.

HURIWA lamented what it described as the lawless tendencies of personnel of these agencies in the line of duty.

“Lawlessness and officer’s misconduct and loss of discipline is the fundamental cause of the degeneration of efficiency and effectiveness of the members of the Armed Forces of Nigeria,” he said.

HURIWA noted that the security breach into the Nigerian Defence Academy, NDA, by terrorists as widely reported on Tuesday, can be traced to lack of discipline hence these armed non-state actors easily found a way of invading the NDA.

“There is a sharp rise in the use of Gestapo type operations by the EFCC; the SSS and the case of the Nigeria Police Force are that their services are now highly commercialized meaning that if you can pay, you can get armed police operatives to do your biddings no matter how unlawful, dreaded, Sinister and outrageous,” the rights organisation.

“The Police operatives in some states commands notably in Imo State are known for framing up citizens and for flagrant violations of civil rights including the use of extrajudicial killings on persons they suspect to belong to Indigenous Peoples of Biafra (IPOB) or even persons whose rivals have procured the police to tag them as IPOB and kill them.

“If we may ask, the punishment for belonging to is proscribed group, is it death by extrajudicial killings?

“Has Nigeria no construction and laws anymore? What does section 36(5) of the Constitution says? The group wondered.

“Sadly, in a state like Imo, the State government is accused of enabling these various ramifications of abuses of powers by the Police.

“The report of Amnesty International on killings by security forces in the South East with Imo occupying the principal place of dishonour is so disconcerting.

“We call on the Federal government and the South-East governors to speak out on that Amnesty International’s report which is credible, truthful and tragically outrageous and to take action to punish offenders within the security forces or they should be prepared to be individually named in the litigation that are being initiated by many local and international NGOS before the ICC in the Hague, Neverlands.

“We call on the Imo state governor to tell the World what he has done with the hundreds of detainees he accused of causing the disturbances in Imo State for which he named ‘politicians’ as sponsors of the disturbances.

“On May 24th 2021, Mr. Hope Uzodinma said no fewer than 400 people were arrested over security threats in Imo State but months after no single prosecution is known to have happened or dear media colleagues, do you know of any prosecution from the mayhem that occurred in Imo?

“Has any police or soldier been punished for killing many IMSU students through deliberate criminal acts or accidental discharge? The group asked.

“The Imo State governor compensated Soldiers and Police families whose breadwinners were killed by unknown gunmen but no a kobo has been paid to the hundreds of youths of Imo killed by security forces clearly identified in that Amnesty International’s report.

“The police as an institution needs a fundamental rebirth. Nigeria must reform the police 9r the deformed police force will permanently deform Nigeria.

“Police are hired for all kinds of jobs by those who can afford. It is no longer a secret when individuals fight over land ownership, the rich amongst the disputing parties have found a way of hiring police from Abuja to deal with their rivals. Top-rated officers are behind these rackets.

“Cases of such abound all across the country. It was for these abuses that gave rise to #ENDSARS# protests for which panels were set up and most of these panels have made far-reaching recommendations with most of them giving binding judgements for compensation running to almost N200 billion.

“Nigeria needs to reform the law enforcers and the Institutions of law enforcement or else these unprofessional operatives will ruin Nigeria financially.

“With over N200 billion damages to be paid out, these huge financial burdens could have been avoided if the police is sanitized.

“EFCC is in the news. SSS is in the news. First, why are they DSS when the law identifies them as SSS? WHAT DOES IT COST THE NATIONAL ASSEMBLY TO LEGISLATIVELY REBAPTISE SSS AS DSS SINCE THAT IS THEIR PREFERRED NAME.

“Then why are the EFCC and DSS using the same style like armed kidnappers and breaking down peoples doors just to effect arrests and most had ended up as mistakes? WHY ARE THERE NO ACCOUNTABILITY AND NO OFFICERS ARE PUNISHED FOR WRONGFUL EXERCISE OF POWERS OR EXCESSIVE USE OF FORCE?

“However not one of those justices were convicted and one of them died thereafter from depression-related issues. Yet they were not corrupt as accused.

“We do not know who allegedly captured Nnamdi Kanu of IPOB in Kenya but there are allegations of illegal rendition and torture which are offensive to international law. WHY IS THIS CHARGE NOT BEING INVESTIGATED?

The SSS invaded Sunday Igboho’s house and neighbours told the media that they were kidnappers but SSS hours later owned up.