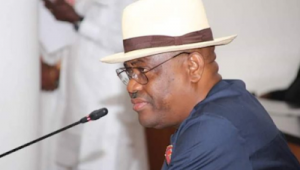 Prince Uche Secondus, the Rivers court suspended chairman of the Peoples Democratic Party, PDP, has declared that he is not afraid of any court order, as he will defend himself.

A Rivers High Court granted on Monday an interim injunction restraining Secondus, from parading himself as chairman and member of the PDP.

“If Secondus and the party are taken to court, they will defend themselves.

“PDP and Secondus are not afraid of court; this party is a child of history owned by Nigerians, bigger than any individual or group, including desperadoes,” Abonyi said in the statement.

The order was based on the consideration of an ex parte application in suit No: PHC/2183/CS/2021 filed by Ibeabuchi Ernest Alex, Dennis Nna Amadi, Emmanuel Stephen and Umezirike Onucha against Uche Secondus (1st defendant) and the PDP (2nd defendant).

The Judge restrained Secondus from performing the functions of PDP , attending or presiding over any of its meetings at the Ward, Local Government or State level.

He is also restrained from calling for any Ward, Local Government or State Congress of the PDP or setting up committees for such Congresses or participating in any activity of the PDP whatsoever whilst on suspension.

Gbasam also granted the petitioners leave to serve by substituted means the originating summons, motion on notice, all orders made by the court and all subsequent processes on the respondent by pasting same on his gate at No.1 William Jumbo Street, Old G.R.A Port Harcourt.

The judge further granted leave to serve by substituted means orders made by the court on the respondents by publishing the same in the Nation Newspaper.

The court also ordered the PDP to be served by substituted means.