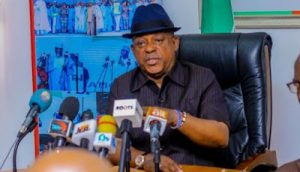 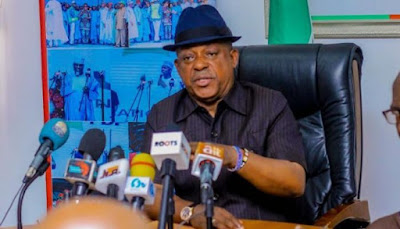 Embattled Chairman of the Peoples Democratic Party, PDP, Uche Secondus has denied claims of being suspended at his Ward 5 in Ikuru town, Andoni Local Government Area of Rivers State.

Reports making rounds on social media claimed that Secondus suspension was announced by the Ward Chairman of the Party, George Christopher, at the party’s extraordinary meeting at the party’s secretariat at Ikuru town, Andoni Local Government Area.

The chairman said eleven executive members out of the 17 endorsed Secondus suspension from the party.

According to him, the national chairman had not attracted development to the area despite his high political profile and inability to manage the party.

“Suspension of Prince Uche Secondus was done by the Ward executive after a duly constituted Ward meeting called by the Secretary on the instructions of the Chairman, according to the Constitution of our great party.

“Until further notice, our brother, Prince Uche Secondus remains suspended. I want to thank you for coming and reaffirming the suspension of Uche Secundus,” he said.

However, when contacted, his media aide, Ike Abonyi refuted the claims adding that it never happened.

“I can confirm that the story is false and you can quote me anywhere. I’m currently in Port Harcourt and there’s no such thing as him being suspended,” he said.