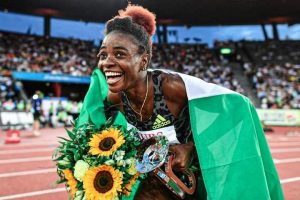 Nigerian athlete, Tobi Amusan has become the first Nigerian to win a World Athletics Diamond League trophy since its inception in 2010.

She defeated Dutch athlete Visser Nadine who ran a National Record and PB of 12.51secs to emerge second while Tapper Megan of Jamaica came third in 12.55secs

Amusan overcame the disappointment of finishing fourth in the Tokyo Olympics to end the year on a high.

The victory means the 24-year-old will go home with $30,000 in prize money as well as a wild card for next year’s World Athletics Championships in Oregon, USA.