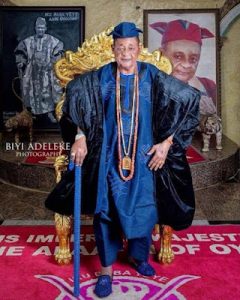 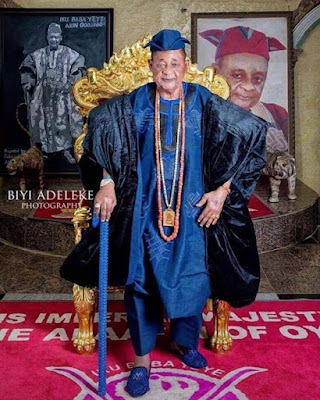 The Speaker of the House of Representatives, Femi Gbajabiamila, has been conferred with the traditional title of Aare Baasofin of Yorubaland (the Supreme Lawmaker of Yorubaland) by the Alaafin of Oyo, Oba Lamidi Adeyemi.

The Alaafin communicated the conferment of the title to Gbajabiamila in a letter dated September 7, 2021, and presented to the Speaker on Thursday at the National Assembly, Abuja, by members of the Oyomesi Council led by the Bashorun of Oyo Kingdom, High Chief Olayinka Ayoola, who is the traditional Prime Minister of Oyo Kingdom.

According to a statement issued by the Special Adviser to the Speaker on Media and Publicity, Lanre Lasisi, this is the first time that a Yoruba son would be conferred with such a title.

Adeyemi’s letter read in part, “Since your victory at the polls and subsequent swearing-in as a member of Federal House of Representatives representing the good people of Surulere Federal Constituency of Lagos State in 2003, 2007, 2011, 2015, 2019 and eventual emergence as the Rt. Hon. Speaker of the 9th National Assembly House of Representatives via an overwhelming 283 votes out of 360 members.

“I have watched with keen interest your unquantifiable contributions on the floor of the House as a member with the highest number of bills and motions, to your rise from a member to Minority Leader, Leader of the House and eventually the Rt. Hon. Speaker, and your centrality in the federating unit Nigeria have placed you in the legislative realm just like our forefathers who were actively involved in nation-building.

“Going by the above, you have demonstrated as a Legislator the uniqueness inherent in the Yoruba race participating effectively in nation-building; you have participated in ensuring that the practice of separation of power to check abuses of the Executive and ensure the smooth running of government.

“After due consideration and indeed consultation, the Alaafin in Council has identified you with the aforementioned attributes and considered you worthy of being honoured. It is on this basis that I have decided on behalf of Yoruba land to pick you as ‘AARE – BAASOFIN OF YORUBA LAND.’

“This new title bestowed on you is a clear reflection of your outstanding success as an astute legislator, accomplished Legal Luminary, successful Representative of Yoruba race and Nigeria in general. With this title, you are placed in the rank of great Empire builders and defenders of the Yoruba race. The least I can expect from you in your new title is to put all the state attributes of yours for the service of Yoruba land and advancement of a balanced system of government.”

Presenting the letter, the Bashorun of Oyo Kingdom, who spoke in Yoruba language, said the selection of the Speaker as the first to get the title in Yorubaland was well thought out.

Ayoola, whose remarks were translated by Bishop Ayo Ladigbolu, leader of the Oyo Development Association, said looking at Gbajabiamila’s records, the Alaafin saw in him “an adequate representation of the kind of balance in governance where the Executive exercises its own authority, but the Legislature is there to say this is what the people want, and this is how we want you to do it.”

Accepting the honour, Gbajabiamila said he was full of appreciation and pride looking at where the title came from.

He said, “I honestly want to thank the Alaafin for this gesture; this honour that he has done to me and the House of Representatives. May the Almighty God continue to honour him. I receive this honour with pride because of where it is coming from. You cannot talk about Yorubaland and not talk about the Alaafin and the Oyo Kingdom as the cradle of civilisation.”

The Speaker noted how democratic the Oyo Empire had been even before the coming of the colonial masters, saying the role of traditional rulers in Nigeria’s democratic journey could not be too strongly stressed.

“I have accepted this honour on behalf of the House and my colleagues,” he added.