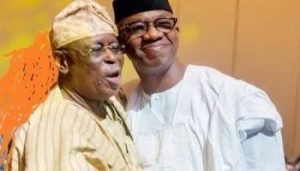 Abiodun, who just returned from a controversial trip to the the United Kingdom, said he visited Osoba during his stay.

According to him, the former Governor could not attend today’s Independence Day celebration because of the surgery, which he said was successful.

“Our Baba, Chief Olusegun Osoba, underwent knee replacement surgery in the UK and we thank God that it went well, as he is now fine and in perfect condition. He spoke to me that he would have loved to be present at the independence celebration, but for the surgery,” a statement by the Chief Press Secretary to Abiodun, Kunle Somorin, read.

Abiodun, while congratulating Osoba over the success of the knee replacement surgery, explained that the elder statesman was recuperating well after the surgery he underwent on Thursday, September 30.

Abiodun quoted as saying that Nigerians should rally round their leaders, expressing optimism that Nigeria will overcome its challenges

According to him, Osoba bad sent his words of admonition, asking Nigerians not to lose hope in Project Nigeria.

“Even in his condition, Baba offered prayers for Nigeria in general and Ogun state in particular,” Abiodun had stated.

He prayed God preserve Osoba and grant him good health, assuring Nigerians that the octogenarian would soon return.

Osoba is a close friend to the National Leader of the All Progressives Congress (APC), Chief Bola Tinubu, who was said to have earlier undergone a knee surgery in the UK.