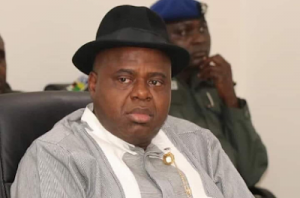 Bayelsa State Governor, Douye Diri, has said the recent passage of the Petroleum Industry Acts (PIA), by President Muhammadu Buhari, is a recipe for anarchy in the country.

Diri claims the passage is yet another step taken to subordinate oil-producing states, making it more like a subordinate and superordinate relationship.

The governor noted that there’s a missing gap in the relationship of the state, the Niger Delta region and the government at the centre.

Diri made the remark on Friday evening during the Independence Anniversary Dinner celebration at the DSP Alamieaeigha banquet hall, Yenagoa, the state capital.

“There’s a missing gap in the relationship of our dear state, the region and the federal government. The point is that even as Christians we worship God on Sundays, while the Moslems on Fridays, yet we still have sins therefore in the same vein we will not be tired of talking about justice and freedom for the state and the Niger Delta region.

”May I appeal to those who are aggrieved to stop the bloodletting across the country, just recently we lost very meaningful Nigerians in Anambra State; that is an ill wind that will not our state good. Let us look for dialogue to resolve our differences, we know it is painful when people shove aside dialogue.

I have always reminded people that for those who make peaceful change impossible, violent change becomes inevitable. Let us not tread the route and road of violent change, this country is blessed and I believe the founding fathers have seen the greatness and not the misery of Nigeria.

On the issue of diminishing oil, he said there is a forecast that soon nobody will trade on oil, therefore while the oil lasts, just 13 percent is given to host communities and 87 percent taken by the federal government, the people must continue to talk about it.

He called for diversification into other areas of revenue generation not explored and appealed to leaders in the state to support his administration to succeed.

“I will remind us that we have to look into diversification so we can have more development. Let us also play politics according to the rules, and not politics of thumb. I believe if we play according to rules, we will transit from one developing government to another development-oriented government because ultimate power belongs to the people. Let us build strong institutions instead of strong humans, so our institutions can outlive us.

”This is the time we Bayelsans need to exhibit that spirit of oneness and unity shown during the creation of the state.