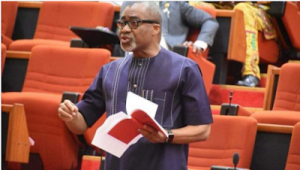 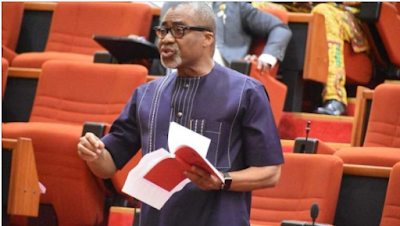 The Senator representing Abia South Senatorial District, Enyinnaya Abaribe has said that it remains unknown those committing the killings in the South East.

The lawmaker, who was reacting to the recent killing of Dr. Chike Akunyili, husband to late Dora Akunyili, a former Director General of the National Agency for Food and Drug Administration and Control (NAFDAC), also called on security agencies to carry out serious investigation into what is happening in the region and stop pointing accusing fingers to groups and individuals.

The Abia-born lawmaker further suggested that some persons may be of the feeling that they should turn Anambra State into a theatre of murder, assassinations in order to create the impression that the State is unsafe for voters to come out to cast their votes during the forthcoming governorship election.

Abaribe spoke to journalists immediately after a human rights lecture organised by the Human Rights Writers Association of Nigeria, HURIWA, with the theme: “Nigerian School Children; Insecurity and Human Rights”, held in Abuja.

“Let us say that what is going on in the South East is something that we cannot just comprehend properly,” Senator Abaribe said.

“People in the South East have never been violent and we are not murderers and part of the confusion is that we don’t know who is committing these crimes.

“We know that there’s an election coming I think in 35 days and the feeling is that they should turn the state into a theatre of murder, assassinations maybe to create the impression that it is so unsafe that nobody should come out to vote.

“And we are calling on the security agencies that this is the time they should actually do a serious investigation into this. Drawing conclusions saying it’s this group or that group, this person or that person does not help anybody.

“That’s why in the motion that was brought by Senator Ekwunife today she also urged the Governors of the South East and Security heads to put heads together and find out why this is happening. We’re also calling on the public, please if you have any information let the security agencies know.

“We just cannot continue like this. We suffered the devastation of the civil war then we built up ourselves. We can’t afford to have a self-inflicted devastation again where nobody comes to the South East anymore because of fear. We’ve never killed anyone because of election.

“We’re not seeing the type of intelligence gathering that we saw in those days that the police and other agencies used to get to the bottom of issues. But I do not believe that it is so.

“I have absolute faith in the DSS and police to get to the root of everything that is happening and I urge them to go ahead and let us know why these things are happening,” he stated.

Speaking on Ebube Agu, a regional security outfit said to have been set up by Governors in the region, Abaribe added, “The governors told us that they have set up an outfit that will help complement what the police and other security outfits are doing.

“But we haven’t seen any practical demonstration of that thing they’ve set up. Most people in the South East are wondering why you will mention Ebube Agu and all these killings are going out in the South East and we’ve not heard that they held or brought someone to book or handed them over to the police.”