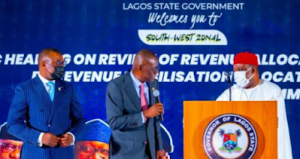 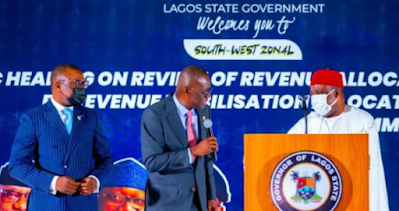 Babajide Sanwo-Olu, governor of Lagos state, says there is need for a new revenue sharing formula that is fair and equitable, reflecting the contribution of stakeholders to the common purse.

The governor also called for a special status for Lagos over its “huge financial obligations” to the national coffers.

Sanwo made these remarks at the opening of a two-day South-west zonal public hearing on the review of the revenue allocation formula organised by Revenue Mobilisation Allocation and Fiscal Commission (RMAFC), on Monday, in Lagos.

The governor added that the states also wanted a revenue formula that enhances the capacity to deliver high-quality services and dividends of democracy to Nigerians.

According to him, the truth remains that the review of the current formula is long overdue, as the prosperity of Lagos State directly or indirectly has its multiplying effect on the south-west region and the entire country as a whole.

“The best way to guarantee national progress and development is by paying attention to subnational development because the national is a summation and a reflection of the subnational,’’ he said.

Sanwo-Olu re-emphasised the request by Lagos state to be accorded “Special Status’’.

“Lagos State was the epicentre for COVID-19, the same way it was for the Ebola virus some years ago.

“The management of these unforeseen occurrences comes with huge responsibilities and financial commitments on the part of the state government.

“Although we have put that experience behind us and forged ahead, the reality of these unfortunate incidents remains with us; resources that should be committed to other areas of need are now being used for the restoration of damaged public facilities.

“It will be unfair for Lagos State to be left alone to bear these huge expenses without assistance from the centre.

“COVID-19 pandemic is another issue that has once again supported the justification for Lagos State to be accorded the privilege of special status.

“As much as this affects the entire country, it is a fact that the degree of the havoc caused by this virus differs from state to state,” the governor added.

He added that the call for Lagos State to be accorded special status was not a selfish proposition.

“It is in the best interest of the country and all Nigerians for Lagos state, which accounts for about 20 per cent of the GDP and about 10 per cent of the nation’s population to continue to prosper,” he said.

Sanwo-Olu further explained that Lagos is more than just another state in the Nigerian federation as there is no tribe in the country that has no significant stake in the state.

The governor appealed to all stakeholders to approach the review process with open minds.

In his address, Elias Mbam, chairman of the RMAFC, lauded Sanwo-Olu and Lagos State for accepting to host the public hearing.

Mbam said RMAFC began the process of reviewing the subsisting vertical revenue allocation formula in line with changing realities as the last review was done in 1992.

He enjoined stakeholders to participate actively and effectively as the commission would take all views and recommendations into consideration.

In the current sharing arrangement, the federal government (including special funds) is entitled to 52.68 percent while state governments get 26.72 percent and LGAs receive 20.6 percent.