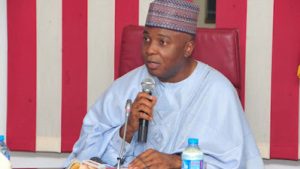 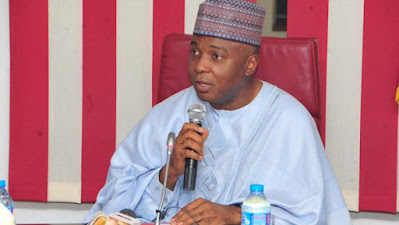 Dr. Abubakar Bukola Saraki, a former President of the Nigerian Senate, has told youths nursing the ambition to run in the 2023 presidential election to shelve the idea.

Saraki said it was already too late for such persons to stand any chance of winning an election in this country, adding that the system is too rigid.

The former Senate President said he would not even want any youth with a sound mind to contest for political offices at this point because they still possess some good values which would be corrupted before they win any election.

“You have to give up some good values that you have to be able to be competitive,” the former Kwara State Governor said at the weekend during an Independence lunch with diverse Nigerian youths in Abuja.

“It is too late to win election. I will be very honest with you. The System is too rigid against you. You are a young guy, you don’t have money or network where are you going to start from?

“We don’t want that because it means your generation will be as bad as ours. Let’s keep you where you are for now for those who are not yet corrupted.

“Where I believe you can make a difference which no one can stop you is your right to vote. That’s the only role you can play now in reality.

“We should be asking if that is guaranteed. That is what we have been advocating for in the electoral bill and it has worked.

“I think what needs to be done now is that we must participate. Let me explain further, on the day of election, if you look at the line of people that go out to vote… if the people coming out to vote are people we can give 100 naira, the election will not stand. This means we can manipulate. But if the 500 people lining up are people like you election will hold.

“If we say we won’t come out because nothing will change …if we take that attitude, then they will win. Look at all over the world where there is big change, people that made the change are people like you. If you are not registered to vote, nothing will change. It will be who we want to be Governor, Senator that will be.

“If you make up majority of the electorate even if they try to change the result, I know you will not agree because you know your right and the world will stand with you.

“Until those of you that matter take it upon yourself and ask what kind of Governor, president, Senator you want, nothing can change.

“When you get the right kind of Governor and he knows you have the power to vote him out, you will have the chance to come into government because you would have built a pact.

“Their own view is 9 months to election they will share the money and win election. If they know the vote is not about sharing money they will perform well.

“End SARS did not fail, it showed that the youth can participate and the best form of participation is through voting.

“I think the world is tired of the problem and dangers Nigeria could create. There are six million Nigerians that have the right to be in the UK.

“If Afghanistan was a problem then Nigeria is a bigger problem for the UK. Even for self interest, it is in the best interest for UK to work because of the exodus that will go into those places if it doesn’t.

“The world is with us but we must put in place good governance and the right kind of voters that can do that are people like yourself. Not those who want N5000. If the guy that wants N5000 is more than you, then Nigeria is not going to change and we won’t have the right kind of leaders.”