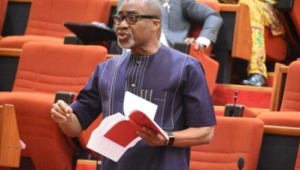 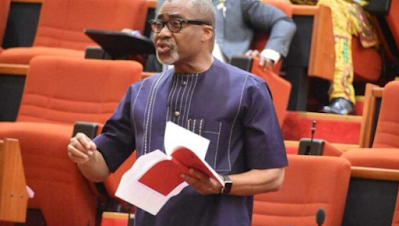 The Senate Minority Leader, Enyinnaya Abaribe, says aside from the Indigenous People of Biafra, the Movement for the Actualisation of the Sovereign State of Biafra, there are more than 30 separatist organisations in the South-East zone of the country.

He stated this in an interview aired on Channels Television.

Abaribe, who represents Abia South in the red chamber, was deputy governor to Senator Orji Uzor Kalu from May 29, 1999 till March 2003.

According to him, the regime of the President, Muhammadu Buhari, might crush secessionist agitators but it would be difficult for the government to crush the ideology until the current administration address the root cause of the problem and embrace dialogue.

Abaribe lamented that the people of the South-East have been grossly marginalised and unfairly treated by the All Progressives Congress government.

The Senator and two others had stood as sureties for detained IPOB leader, Nnamdi Kanu before he was granted bail by the Federal High Court in Abuja on April 25, 2017.

Kanu had jumped bail same year but he had said he fled Nigeria because of the extrajudicial attempt on his life in Abia in September 2017.

The IPOB leader is facing terrorism-related charges before Justice Binta Nyako and the case had been adjourned to October 21, 2021, for continuation of hearing.

When asked whether he was a supporter of IPOB, the Abaribe said, “I am a supporter of the cries of our people against injustice…I stand with my people.

“One of the biggest problems that the media also has is that they tag everything IPOB in the South-East. You won’t believe that there are more than 30 different separatist organisations. IPOB, MASSOB, there are so many and each one of them come back to the same thing.”

“Why we are having separatist agitations everywhere in the country is that some people are unable to manage our diversity,” he added.

The Senator also said that he does not regret standing as one of Kanu’s sureties in 2017 and said, “I will still stand surety because you feel that you are being unfairly treated.”

Abaribe lamented that “the government of the APC has an aversion to dialogue” and must embrace such to quell the growing agitations for fairness and justice to the Igbo people.

When asked about the possibility of an Igbo President in 2023, Abaribe said, “The man who the shoe pinches knows where it hurts. The Igbos are the people in Nigeria who make conscious efforts of setting anywhere else without hurting their host.

“At any point you have never heard that they kill and maim their host so they know how to aggregate everybody’s feelings, their customs, their laws, their norms, everything. And so, because of that we feel that the Igbo will understand you, will even have the time for you.

“Today, we don’t feel that this government have the time for anybody.”

Abaribe also said an Igbo President “is ripe in 2023”.

He, however, said, “We think that the party called APC is not set up to manage Nigeria properly and so it has to be our own party (PDP) that has been able to carry everybody along. And those of us Igbo within our party knowing that we have to play politics, talk to people, you have to be able to see your own point of view and buy into your vision are doing the consultations now.”

The Senate Minority Leader also said the PDP has not ceded the 2023 Presidency to the North because he has been part of all the “negotiations and the talks and I have never seen where there was any such ceding”.

Abaribe boasted that Nigeria would experience a turnaround within six months if he becomes President.

“I would if it falls on me; within six months, all these things would be a thing of the past,” he said.