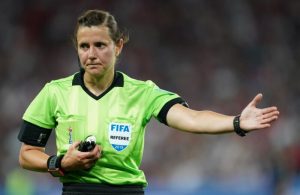 England will be refereed by a female referee for the first time when they face Andorra at the weekend for their World Cup qualifier.

Referee Kateryna Monzul will take charge of the game on Saturday along with fellow Ukrainian assistant referees Maryna Striletska and Svitlana Grushko. VAR is Stephanie Frappart of France while her fourth official and assistant video assistant referee will be male.

The 40-year-old has taken charge of a senior men’s international before, however, having been part of the first all-female refereeing team to officiate when San Marino faced Gibraltar in the Nations League in November 2020.

Frappart has officiated in the men’s Champions League and also taken charge of a men’s World Cup Qualifier, becoming one of the sport’s female officiating trailblazers in the process.

The post Female Referee Set To Lead England’s World Cup Qualifier Against Andorra For The First Time Ever appeared first on FabWoman | News, Style, Living Content For The Nigerian Woman.