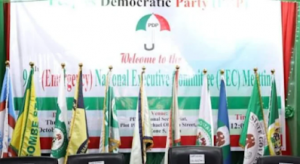 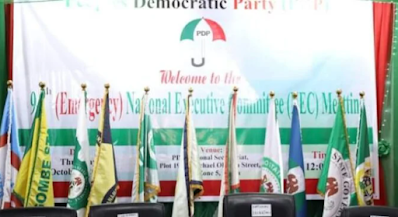 The national executive committee (NEC) of the Peoples Democratic Party (PDP) has approved the zoning of the national chairmanship position to the north.

Kola Ologbondiyan, spokesperson of the PDP, disclosed this on Thursday while briefing journalists after a closed-door meeting of the NEC in Abuja.

The development comes days after governors elected on the platform of the PDP voted in favour of zoning the position to the north.

According to the PDP spokesman, the north and the south would also swap current party positions accordingly.

“The 94th NEC of the Peoples Democratic Party (PDP) held today and well considered the report of governor Ifeanyi Ugwuanyi on zoning and NEC approves the zoning as presented, which as you understand, the positions that are in the south, will go to the north and the positions that are in the north will go to the south,” he said.

Ologbondiyan, however, added that the party is yet to take a decision on the zoning of the presidential ticket.

He explained that the NEC may schedule another meeting to discuss the report of the Bala Mohammed committee on the party’s performance in the past presidential election.

Ologbondiyan added that the national convention of the party slated for October 30 and 31 will hold as scheduled.