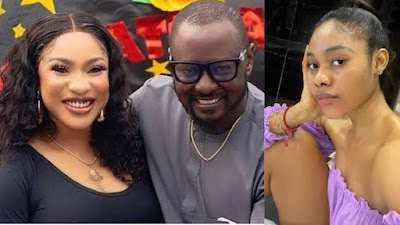 Ever since the split between former lovers, actress Tonto Dikeh and Joseph Egbri fondly known as Prince Kpokpogri, became public knowledge, the development has become messy with various twists.

Shortly after their break-up, the pair have made allegations and counter-allegations against each other via their social media pages. Days after their break up, the actress petitioned the Commissioner of Police, Federal Capital Territory, to investigate her former lover, Prince Kpokpogri Joseph, for allegedly blackmailing her among other issues.

Moreso, stories made rounds on the internet that Prince Kpokpogri was arrested by the personnel of the Department of State Services. Prince Kpokpogri, who identifies himself as a politician hastily debunked the rumours via an Instagram Live session.

He also fired back at the actress alleging that she takes illicit drugs while he urged the men of the National Drug Law Enforcement Agency to investigate the actress activities.

While the former lovers attacked themselves on social media, they dragged a popular social media influencer and dancer, Usiwo Orezimena Jane popularly known as Janemena, into the messy web of their break-up.

Tonto Dikeh mentioned that she had a sex tape that featured the dancer and her ex-lover, this triggered a series of events as the young lady wrote through her lawyers demanding that the actress retracts her statement and also pay N500m for damages.

However, the actress stood her ground with the claim, daring the dancer to head to court, despite the fact that Prince Kpokpogri denied such occurred.

Taking to his verified Instagram account in a post he made, Prince Kpokpogri wrote in part, “I have deliberately avoided the issue of Janemena till now but it will be selfish of me to allow the poor lady who has lived and still living a virtuous life to be dragged into our breakup which has become messy. Is Janemena my friend? Yes! Beyond going to her shop opening year. Our relationship has only been on phone.

“We have been family friends for years and the husband is someone that is close to me. It is a taboo where I come from to sleep with a married woman even though I am still single, worse of all, with a married Isoko lady who will pay the ultimate price if she does that.”

Prince Kpokpogri further issued a public apology on September 27, 2021, to Janemna’s husband via his verified Instagram page. The message read in part, “A public apology: I woke up this morning feeling very uneasy and decided to say this from the depth of my heart. To the family I respect, love and hold in high regards, I am deeply sorry.

“First and foremost, I also want to use this medium to apologise to Jane’s husband, Mr Andre, it is an unfortunate incident on how your wife was dragged into this.”

In a new twist in the ongoing break-up saga between the actress and the ‘prince’; hours ago, a voice note surfaced online which involve a Prince and a certain Jane.

During an apparent conversation, a man who has been identified as Prince noted that he had sex with one Jane at least 30 times and she gladly speaks of his sexual prowess. The Prince further stated in the conversation that Jane told him that ever since she had known her husband for nine years they never had that kind of sex.

The Prince added in the leaked phone conversation that most time he had sex with ‘Jane’ for almost a whole day. The voice note further stated that ‘Jane’ is the breadwinner of the family.

In the heat of this new development, on checking the verified Instagram page of Prince Kpokpogri, it was discovered that he has deleted the apology he made to Janemena’s husband and family member.