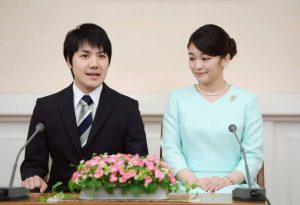 The couple submitted their registration at the local ward office around 10 a.m. local time Tuesday, according to the Imperial Household Agency, forgoing the usual pomp and circumstance of most royal weddings.
Mako, who turned 30 over the weekend, announced her engagement with Komuro four years ago but their union has been plagued by years of controversy, public disapproval and tabloid frenzy over a money scandal involving Komuro’s mother.

At a press event in the afternoon, Mako appeared alongside her husband in front of a selected group of journalists. The newlyweds apologized for any trouble caused by their marriage and expressed gratitude to those who supported them.
“To me, Kei is a very important, indispensable existence,” Mako said, wearing a pastel dress and pearls.
“Up till today, there were only limited opportunities for me to express my feelings, and there were some misunderstandings because of that,” she said. “There was truly unilateral speculation. I felt fear about such spread, and I felt saddened as well.”
Komuro said “misinformation” was spread in the last four years as if it were true, but he thanked people who had helped them during difficult circumstances.
“I love Miss Mako. This is a life lived only once, and I would like to spend my life with the person I love in happiness,” he said. “Mako and I would like to build a warm, nice family. At the same time, I would like to do the best I can to support Mako. Happy times, unhappy times, we would like to be together, and we will be indispensable to each other.”
The newlyweds are expected to move to New York City, where Komuro works at a law firm.
As the emperor’s niece, Mako wasn’t in line to the throne — Japan’s male-only succession law prevents that from happening. And under Japanese law, female members of the royal household must give up their titles and leave the palace if they marry a commoner.

The former princess, who is now known as Mako Komuro, is the first child of the current emperor’s younger brother, Prince Akishino, and his wife, Princess Kiko. Born on 23 October 1991, she initially followed royal tradition and attended the elite Gakushuin school, where members of the imperial family usually study.

But she broke with custom by leaving the institution for her university studies. Ms Mako attended Tokyo’s International Christian University, where she studied art and cultural heritage, and spent a year at the University of Edinburgh. Later, she earned a master’s degree at the University of Leicester, an experience she said was “wonderful”.

People close to Ms Mako described her as an independent and friendly woman who had pursued a career while performing imperial duties, a profile by Japan’s Kyodo news agency said.

She first met Mr Komuro, who was also born in 1991, at a meeting of students planning to go abroad in 2012. His humble origins meant that tabloids spent a long time digging dirt on his family. Amid the scandal in 2018, he moved to New York to study law at Fordham University, and the couple reportedly kept in touch through the internet.

He only came back to Japan last September, a return that was not without controversy. Mr Komuro was dressed casually and sporting a ponytail, which for many was another proof that he was not fit to marry the then-princess.

The years of speculation and slurs have taken their toll on Mako. Earlier this month, the palace disclosed that she suffers from complex post-traumatic stress disorder (PTSD).
The last royal to do so was her aunt, Sayako, the only daughter of Emperor Akihito, when she married town planner Yoshiki Kuroda in 2005.

The post The Unusual Story Of How Japan’s Princess Mako Gave Up Her Royal Status To Marry A Commoner appeared first on FabWoman | News, Style, Living Content For The Nigerian Woman.