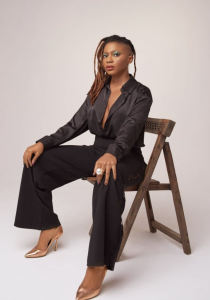 Uyaiedu and her ex-lesbian partner, ‘Amara The Lesbian’ have been in the news for the last 48 hours.

Drama started when Uyaeidu called out the activist on Instagram on Monday, January 3. She accused her of being emotional and physically abusive while they were together.

Amara in her response made it clear she’s not running from the allegations and anyone who thinks she is, should “think again”.

She also accused Uyaeidu of being manipulative and went on to open a can of worms about the producer’s past.

2. She hails from Akwa-Ibom State.

3. She is a younger sister to actress, Nse Ikpe-Etim.

4. She is the co-founder of Hashtag Media House, a media communications company.

5. Ikpe-Etim co-produced and directed Ìfé, Nigeria’s first lesbian-themed film in 2020. The film was released abroad in October 2020, at the Toronto LGBT Film Festival due to controversies surrounding its release in Nigeria.

8. She was once married. She is believed to have been in an open marriage with her ex-husband.