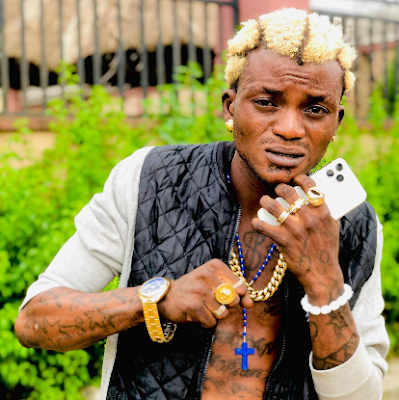 Nigerian artiste and Zazoo crooner, Habeeb Okikiola, also known as Portable, has revealed he has two sons from different women.

He revealed this during an interview with Jabless in one of his Podcast episodes ‘Jabless Original Intelligence’ while recounting his experiences before his hit single with Olamide.

When asked if he has kids, Portable said: “I have two sons but they are for different women.

“I don’t have one girlfriend oh! Many girls are following me now everywhere I go I hear ‘I love you’ because of the money I have, but I have one girl I’d like to marry, but she’s misbehaving at the moment.”

Recounting his experiences, Portable said he really suffered as an artist especially during COVID-19 lockdown.

“I suffered so much before I got here, especially during the lockdown. That COVID period, I had no shows to perform and being a singer is the only thing I do to make money, It was so bad then,” he said.

Recall that Portable went viral sometime in December 2021 and has since become an internet sensation after Olamide featured in his song ‘Zazoo Zehh’.