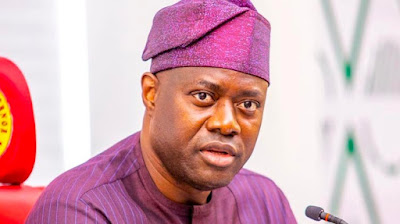 Oyo State Governor, Seyi Makinde, is currently in a closed-door meeting with Lekan Balogun, ex-Governor Rashidi Ladoja and other members of Olubadan-in-Council.

It was learnt that a new Olubadan may be announced after the meeting.

The meeting holds after members of the Olubadan-in-Council elevated to Obas have agreed to drop their crowns and revert to High Chiefs.

The Otun Olubadan, Senator Lekan Balogun, who is the next in line to the Olubadan, had also agreed to revert to their original positions following the directive of Governor Seyi Makinde that they should revert.

This is the first meeting Ladoja, who is the Osi Olubadan of Ibadanland, will be attending a meeting with other kingmakers.

On Tuesday when the kingmakers met, Ladoja and the Iyalode of Ibadanland, Chief Theresa Oyekanmi, were absent.

However, it was gathered that although the Iyalode was indisposed, she was in support of the last week’s press briefing where the High Chiefs held that the Otun Olubadan, Senator Lekan Balogun, is the next Olubadan.

He insisted that Ibadan traditional institution must revert to its original concept.

A statement by the Chief Press Secretary to the governor, Mr. Taiwo Adisa, quoted Makinde as saying that “this should be the last time there will be controversy on the next person who will ascend to the throne of Olubadan of Ibadanland.

“As a government, I am giving assurance to indigenes and lovers of Ibadan that what Baba stood for is what I will carry through. So, whoever wants should key into it or not. We must do what is right to preserve the integrity and sanctity of the traditional institution of Ibadan land.”