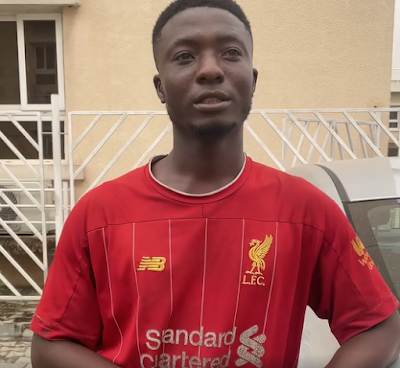 Defying the scorching sun and rowdy scenes daily to hawk bottled water in Ajah, a hustling and bustling axis of Lagos state, life is far from being rosy for Ekuma Jeremiah.

But not even his condition could stop him from helping others.

On Thursday, a video wherein Jeremiah could be seen giving money to some inmates inside a van of the Nigerian Correctional Service (NCS) surfaced online.

In the short clip, shared by Ojo Emmanuel, a photographer, the hawker is seen carrying a crate of bottled water on his head while giving out some of the money he had made.

According to Emmanuel, the hawker gave out about “70 percent” of what he had on him to the inmates.

Sharing a video of the scene on his Instagram page, Emmanuel wrote: “Just a few minutes at Ajah waiting for the traffic light, bottle water seller shares at least 70% of the cash on him to the immates in this Nigerian correctional service bus.

“I have never been this impressed by such act of love and Generosity, immediately I took his phone no just so I could get his account details later, which I will share here soon (called him a couple of times he is yet to pick up).”

In an interview, Jeremiah said he gave out the money to the inmates out of pity.

“I was not inspired by anyone. I gave the inmates money out of pity. I didn’t do that because I’ve been to a police station… since I was born, I have not been detained in a police station,” he said.

“Though I am very poor and sell bottled water, I still have my freedom, I can eat whatever I want to eat and go anywhere I want to go, but the prisoners do not have that freedom.

“They are being denied of many things. They cannot make a choice of what to eat, they take whatever is given to them. Sometimes when they crave to sleep, they would be denied but I can sleep whenever I’m tired.

“So, immediately I saw them, I was touched. I gave the first person N100 then others started begging me for help, so I decided to also give them. Basically, it was due to pity.”

The gesture, which came as a surprise to many Nigerians, has continued to elicit reactions on social media platforms with some users lauding the hawker for his generosity despite his condition.

In a follow-up post, Emmanuel revealed that the hawker had received a donation of N317,000 as of Friday afternoon.

He also disclosed that Jeremiah’s account was flagged due to the fact it was a student account.

“It’s now time for a status change, thanks to everyone who has been a part of this movement so far. God bless you all,” he wrote.

“I can’t put a figure to how much we have raised yet because I guess his (Jeremiah) account was flagged at about 1pm today immediately he hit 317k cos its a student account.”