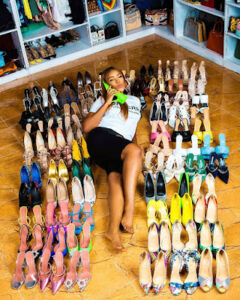 Popular blogger, Linda Ikeji, has boasted of hiring 100 lawyers to fight against the N25 million awarded against her over an alleged libel content her blog published.

She said this on Twitter while reacting to the judgement of the High Court of the Federal Capital Territory, Abuja asking her to pay general and exemplary damages of N25 million to a claimant, Mrs Ajibola Ajayi, daughter of former Governor of Oyo State, Senator Abiola Ajimobi.

She also criticised a law firm that represented Ajayi, Olaniwun Ajayi LP, for bringing the case to public knowledge on Twitter.

Her blog was also asked to publish a written apology, according to the law firm.

Linda Ikeji had reported that Ajayi described some protesting students of the Ladoke Akintola University of Technology as a “generation of mannerless children”.

But the former Oyo governor’s daughter after the publication issued a press statement noting that the Instagram page quoted by Linda Ikeji, ‘conceited_csj’, was not hers.

Subsequently, Ajayi secured the services of a law firm, Olaniwun Ajayi LP, on the matter.

It was learnt that in a judgement delivered on April 12, 2022, the court held that the publication by Linda Ikeji was “false and malicious”.

According to Linda, the law firm filed the same case in both Lagos and Abuja High Courts without her knowledge.

She tweeted, “Lol. You’re such an idiot lawyer. I hear you’re an inexperienced 26 year old? How can you file in Lagos and Abuja on the same issue? And then you don’t even inform me? Hope you’re ready for appeal and supreme court? And a countersue? Tell your client to get ready!

“Also if you’re using my name to catch clout like this on social media, gloating and happy… does this mean I’m the biggest client your firm has ever sued and won against? Or is this how you announce all your victories? I should sue you for using my name like this.

“They are such a big law firm and they are using Linda Ikeji to chase clout on Twitter? I’m the biggest thing to ever happen to them? Lol. I hope when I come after them, they will continue to tweet. I’m done talking. Thanks, everyone for the love and support. God bless.”

What the court said -Law firm

Earlier, the firm tweeted, “Olaniwun Ajayi LP is happy to have successfully represented Mrs. Ajibola Ajayi, the claimant in Suit No. FCT/CV/667/2018: Mrs Ajibola Ajayi v. Linda Ikeji in an action filed at the High Court of the Federal Capital Territory, Abuja.

“In the action, the claimant had sued Ms. Linda Ikeji in respect of the defamatory article published in the latter’s blog, https://t.co/96s6uH3OKc on 15.01.17 and 17.01.17 which cited Mrs. Ajibola Ajayi as having described protesting students of the Ladoke Akintola University of Technology, Ogbomoso, as a “generation of mannerless children” in an Instagram post with the username “conceited_csj”.

“In the judgment delivered on 12.04.2022, the Court held that the publication by Ms. Ikeji was false and malicious and that the evidence before the Court showed that the Defendant knew that the Instagram account with the username “conceited_csj” did not belong to the Claimant.

“In reiterating the trite principle of law that libel is actionable per se, the Court awarded general and exemplary damages in the sum of N25,000,000.00 (Twenty-Five Million Naira) against Ms. Linda Ikeji and directed Ms. Ikeji to publish a written apology to the Claimant in three National tabloids.

“The claimant was represented in the action by our Ogunmuyiwa Balogun; and it is our belief that with Judgments like this, media outfits and members of the public will verify sources of their information ahead of publication.”