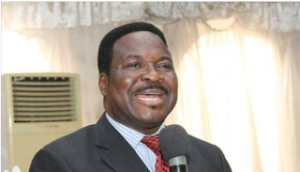 Nyame is serving a 12-year jail sentence for diverting N1.64 billion during his tenure as governor of Taraba, while Dariye is serving 10 years imprisonment for N1.126 billion fraud.

The former governors were among 159 inmates pardoned at a council of state meeting on Thursday.

They were granted pardons on the grounds of age and ill-health.

Ozekhome faulted the decision of the council in a statement issued on Saturday, noting that the president acted beyond his constitutional powers.

The senior lawyer said since the offences were committed against states, it lies in the hands of the state governors to grant them a pardon.

“The offences under which they were tried and convicted fall under state laws which took place after the promulgation of the 1999 constitution during which time they were governors,” he said.

“It becomes clear therefore that only the governors of Plateau and Taraba states could have legally and rightly granted pardon to Dariye and Nyame, invoking section 212 of the Constitution and not Mr president under section 175 of the Constitution.

“The act of granting amnesty or pardon though discretionary, this discretion must be exercised judiciously and in the best interest of the country, so as not to create doubts in and dampen the confidence of, the citizenry in the national moral fabric, and in the fight against corruption.”

Ozekhome added that “the purpose of criminal prosecution is to secure justice, not only for the accused but also for the victims of crimes and the State; and to some extent get reparation and restitution for the victims while deterring others from going the same route”.

“I dare say that in these two instances, both the President and the Council of State goofed and abused their undoubted constitutional powers and privileges,” he added.

“A constitutional issue as volatile as this could have been better managed if the minders of the president had told him the embarrassment this could cause the government in the estimation of the comity of nations. And it is doing just that.

“Granted that the constitution gives the president and the governors the power of prerogative to pardon criminals in deserving circumstances, must it be done in the vulgar way and manner the instant case was handled?

“In fairness to the president, not all the 159 convicts and ex-convicts granted presidential pardon are politicians. But, the most prominent of them are the two former governors.

“That is what has led to the national ruckus, bedlam and hoopla. This is because it could be argued (and rightly too), that the main essence of the last meeting of the council of state was to give an imprimatur to, and grant pardon to the two political heavyweights, while making up the number with some insignificant lightweight ones, using garnished veneer and sleight of hand.

“The president by so doing has certainly violated the provisions of the Constitution and his oaths of office and allegiance to defend the constitution.

“This recent pardon, in my humble view, is the worst way to fight corruption. It will further water, nurture and elevate corruption to a fundamental objective.”