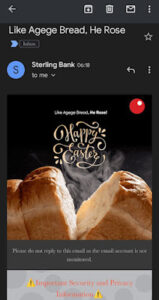 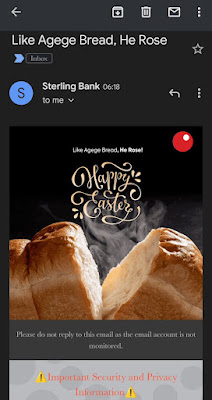 The Advertising Practitioners Council of Nigeria (APCON) says it will sanction Sterling Bank over a controversial Easter ad likening the resurrection of Jesus Christ to Agege Bread.

The advertising industry regulator announced this in a statement issued by Olalekan Fadolapo, its registrar/chief executive.

In celebration of Easter, Sterling Bank had posted an Easter ad on social media platforms and also sent its customers via email.

The message contained a picture of a golden-brown bread divided into two with the caption ‘Like Agege Bread, He Rose!”

Agege bread is a popular Nigerian bread known for its soft, stretchy and chewy texture.

The post sparked public criticism from Nigerians who expressed their outrage online.

Many chided the bank for diminishing the essence of Easter, while some found the post funny.

@Airsae, a Twitter user, wrote, “How can you compare the rising of Jesus Christ with the rising of Agege bread?😡is this a joke or what? Sterling bank, O wrong now!”

I see nothing wrong with sterling bank “Agege bread” Easter Message
That is Poetry!

Responding to the backlash, Sterling bank pulled down the post, replacing it with another post in which it apologised to its customers.

Quoting the Bible verse, John 8:7, the new post reads, “…let the one who has never sinned throw the first stone”.

“Forgive us in the spirit of Easter,” the bank added.

“Blessed is the one whose transgressions are forgiven, whose sins are covered. We humbly celebrate His resurrection, the defeat of death and the hope of salvation.”

But in its reaction, APCON said the “distasteful” advertisement was not submitted for approval by its panel.

It said Sterling Bank would be sanctioned for the advert.

“The Advertising Practitioners Council of Nigeria (APCON) has observed with displeasure the insensitive and provocative Easter celebration advertisement by Sterling Bank Plc which compared the resurrection of Christ with Agege Bread,” the statement reads.

“The distasteful advertisement was neither submitted nor approved for exposure by the Advertising Standards Panel (ASP), the statutory Panel charged with the responsibility of ensuring that advertisements conform with the prevailing laws of the federation as well as the code of ethics of Advertising in Nigeria.

“APCON will take necessary actions to ensure that Sterling Bank is sanctioned for the exposure of such offensive advertisement according to law and that no religious belief or faith is ridiculed or any blasphemous advertisement exposed in any guise.”