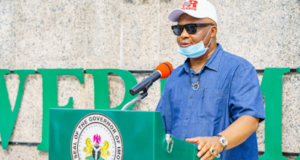 Gov. Hope Uzodinma of Imo State has expressed optimism that the State will overcome its current travails, insisting that his government is not weak.

The governor’s Media Adviser, Oguwike Nwachuku, in a release on Sunday, said that Uzodinma gave the assurance in his Easter message at the St. Rose of Lima Catholic Parish, Ozuh Omuma, Oru East Local Government Area.

The Governor urged the congregation to join him in beseeching God to touch the hearts of those perpetrating the violence to repent in the spirit of Easter “as we mark the death and resurrection of Jesus Christ”.

He noted that the killings in parts of the state were politically motivated as against reports in some quarters that they were the handiwork of the proscribed Indigenous People of Biafra (IPOB).

According to him, the personal property of opposition politicians were hardly affected by the menace in the state, an indication that politicians could not be exonerated from the killings and wanton destruction of property.

He called on those behind the dastardly acts to repent quickly before the government would go after them, adding that the killing of innocent Imo people must stop henceforth.

“These are the activities of wicked politicians who are unrepentant and have continued to sponsor the killings of their fellow brothers.

“We cannot allow the killing of innocent citizens and the activities of non-state actors in the form of criminals and hoodlums to overtake the political space“, he said.