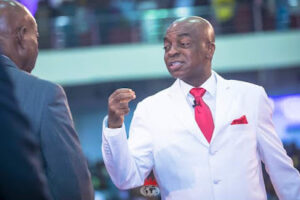 Oyedepo stated this during the Easter service in his church.

The cleric has been a vocal critic of Buhari since 2015 and has now said God confided in him that the country was not heading in the right direction.

Oyedepo also described Nigerians as a people with a “short memory”, as candidates begin to express their interest in running for the presidency in 2023.

“I knew Nigeria was heading for a waterloo. He confided in me. They are under torture.

“Somebody commented recently, you know why Bishop stopped? He shouted and shouted, but they didn’t hear. What will I ever get from it? Will I get elected from it?

“I knew that in 1984, there is no position on this earth that I will fight for. I have taken a strong position in Christ. Now they are going again, deceiving you, what a people with a short memory,” Oyedepo said.