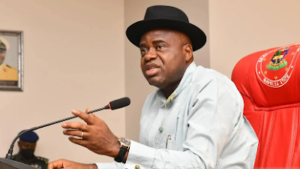 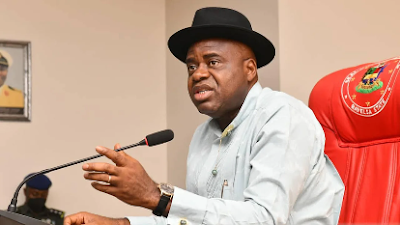 Bayelsa State Governor, Senator Douye Diri, has said insecurity in Nigeria is worse at the moment than it was in 2015 when the All Progressives Congress (APC) took over power in the country.

He stated this during separate courtesy visits of heads of some security agencies to Government House, Yenagoa, on Tuesday.

Speaking when he received the Comptroller of the Nigeria Immigration Service, Bayelsa Command, Mr Sunday James, Gov. Diri, lamented the level of insecurity in the north, saying once a part of the country is in distress, other areas are also affected.

He said the spate of killings by terrorists in the country was a great setback for Nigeria where lives could be taken at will.

He urged the APC-led federal government to effectively curb the killings, urging it to redouble its effort at combating insecurity, particularly in the northern part of the country.

His words: “I use this opportunity to again call on the Federal Government to do something. These are the same issues that led to the APC government coming to power in 2015.

“I am sure that you will agree that things are worse now than in 2015. The Federal Government has to redouble its effort. Otherwise, the joker card is with the people of Nigeria. They know what to do come 2023.

“When one part of the country is sick, it affects the other parts. Kaduna and other states in the North are sick security-wise and it is affecting other parts of the country. Nigeria is very close to the Thomas Hobbes’ ‘state of nature’ where life is described as nasty, brutish and short. The Federal Government has to do something to keep us away from the Hobbesian state.”

Welcoming the new Comptroller, Senator Diri called for more synergy between the service and the state government, especially in the areas of security and investment drive.

According to him, his government had put measures in place to ensure that investments thrive in the state, and expressed the optimism that with collaboration with the service, Bayelsa would be the destination of choice for investors.

He explained that the relative peace being experienced in the state was a result of collaboration among security agencies and urged the new Comptroller to toe the same path.

Earlier, the Bayelsa Immigration Comptroller, Mr Sunday James, said the visit was to formally present himself as the new helmsman of the service in the state.

He said as the agency in charge of giving clearance to intending foreign visitors, he was prepared to synergize to realise the state’s investment drive.