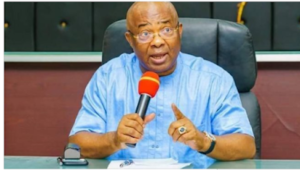 Hope Uzodimma, Imo state governor, says the call for an interim government at the end of President Muhammadu Buhari’s tenure will create “room for anarchy”.

Afe Babalola, founder of Afe Babalola University, Ado Ekiti, had on Monday said instead of holding elections in 2023 after Buhari’s term ends, an interim government should be formed to steer Nigeria in a new direction.

He said the 2023 elections should be suspended, while an interim government should be in office for six months to develop “a new-look peoples’ constitution which should provide for part-time legislators and non-executive president”.

Commenting on the proposal during a chat with state house correspondents on Tuesday, the Imo governor said: “By May 29, if there is no elected government, our constitution has not provided for an interregnum. There shouldn’t be a gap, otherwise, you are creating room for anarchy.”