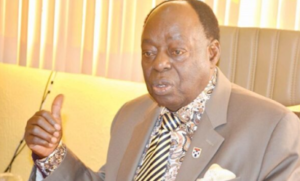 As reactions continue to trail calls by the founder of Afe Babalola University, Ado-Ekiti (ABUA), Afe Babalola, SAN, for the suspension of the 2023 election, the Nigerian Senate on Tuesday described as unfortunate that such opinion is coming from a legal luminary.

Reacting to the development, Senate Spokesman, Senator Bashir Ajibola said, in as much as Senate will not join issues with him, it is very sad that such a comment is coming from a legal luminary that is so much respected by the people.

The Senate said the legal luminary might be offering his opinion against his knowledge of the law, as the procedure for amending the constitution to accommodate what he said, was clearly written.

Ajibola said: “Section 9 of the 1999 Constitution as amended clearly states the procedure for amendment and as a lawyer, Afe Babalola supposed to know all this.

“On the job of a President is not a bricklayers job, it involves intellect and vision for the development of the country.”

Speaking on the part-time legislators, he said the legal luminary appears not to understand the workings of the legislature.

“We are not only making laws, but we carry out oversight functions.

“We entertain the views of our constituents because we are not in a military era where somebody with a military fiat will come out with a new system of government without following due process,” he said.

He advised the Senior Advocate of Nigeria to wait till the 10th National Assembly before coming up with his personal opinion for consideration.

“If he is so passionate about the suggestion he is making now, he should wait for the next Assembly where he will have the opportunity to submit his personal opinion for consideration,” he said.