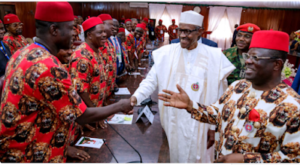 President Muhammadu Buhari says the court should be allowed to decide the fate of Nnamdi Kanu, leader of the Indigenous People of Biafra (IPOB).

Buhari made the comment on Friday when he met with leaders in the south-east at the government house, Abakaliki, Ebonyi state.

The president has been on a two-day working visit to Ebonyi.

Ohanaeze Ndigbo and other leaders in the region have repeatedly called on the president to intervene in the case of the IPOB leader.

But Buhari said it is important that the court makes a pronouncement on Kanu’s case.

Kanu is standing trial on an amended 15-count charge bordering on treasonable felony.

In April, a federal high court in Abuja struck out eight out of the 15-count charge filed against the IPOB leader.