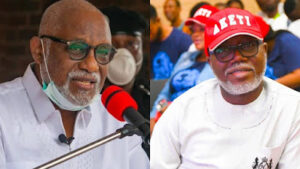 Ahead of the forthcoming primaries of the All Progressives Congress, APC, a fresh crisis is brewing in Ondo State between Governor Oluwarotimi Akeredolu and his deputy, Lucky Aiyedatiwa, over the nomination of candidates.

It was gathered that the deputy governor, some cabinet members, and Akeredolu’s aides from Ilaje Local Government Area are currently working for aspirants other than those whom the party leadership and the governor had ‘anointed’ for specific positions.

According to a party source, the governor and the leaders, including the APC State Chairman, Ade Adetimehin, agreed on candidates for the House of Assembly, House of Representatives, and Senate elections at the meeting held last week.

It was reliably gathered that the party leadership and the governor had agreed to give Abayomi Akinruntan, the son of the Olugbo of Ugbo, a return ticket to the House of Assembly in exchange for his stepping down for former Information Commissioner, Donald Ojogo, who is running for the Ilaje/Ese-Odo House of Representatives seat.

A party leader in Ilaje, who was not present at the meeting, but expressed support for the meeting’s resolution, criticized the deputy governor for working against the decisions taken at the meeting.

The APC chieftain, who sought anonymity, stated that Aiyedatiwa invited them to a meeting immediately and informed them that the Governor had rejected all of his recommendations for candidates in Ilaje and Ese-Odo.

He said, “As things stand now, there are moves in Ilaje and Ese-Odo by the deputy Governor. He expressed disappointment that the governor rejected his candidate in Ilaje constituency 2 who was his Personal Assistant, Segun Iwalokun. There are many meetings that have been held between Thursday and now.

“Despite the Governor’s directive that we should all work for the former information commissioner, Ojogo, the deputy governor is campaigning and working for one Goke Ayara from Apoi. Aiyedatiwa has held two meetings against Ojogo’s aspiration at his house in Akure. I was part of one.

“They also held meetings and campaigned publicly that an Ijaw man is not fit to go for the House of Representatives in the federal constituency.”

However, when contacted over the development, the deputy governor said, “that is not true. How can I be in disagreement with the Governor when we have one administration and one government?”