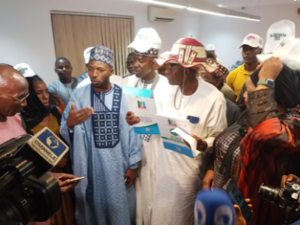 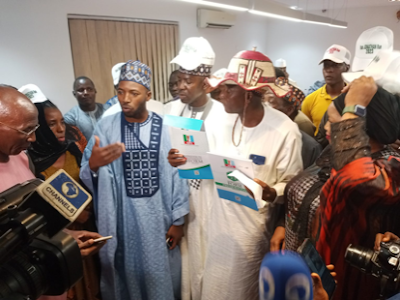 Reactions have continued to trail report that the former president, Goodluck Jonathan, on Monday got the N100 million presidential nomination form of the All Progressives Congress, APC.

The form, was purchased for him by the Miyetti Allah Cattle Breeders’ Association.

Concerned Nigerians, who took to their social media handles to react to the development, lamented the level of politics in Nigeria where everything is possible.

Some expressed shock on how the party which allegedly kicked Jonathan out of office in 2015 would want him back, saying ‘life no balance”.

Other reactors urged the former president to remember how the party buried him in a mock coffin prior to the 2015 general elections.

Here are some of the reactions:

@Hondammybash: “Jonathan for President under APC? This life no balance, wonder shall never end”.

@Abdulkhaleeq: “Buhari has finished his own, everyone now wants to run for the seat, buying presidential forms like 10N biscuits. Where’s our nation heading to? Allah ya Kaimu 2023”!

@Greenaetion: “Dear @GEJonathan, if you can man up and reject this offer, you’ll be highly respected by all. Not all that glitters are gold.

“These are the set of people that make mockery of your government and then disgraced you out of office in 2015. Don’t let the enemies manipulate your mind”.

@Moses8593: “What are these people doing? When did Jonathan become an APC member? all these APC and PDP people will fail this time around in Jesus name”.

@BBGMhome: “I’m completely confused about what APC is trying to do. I knew that they were up to something very dangerous.

“APC that carried the coffin of Jonathan on the street and spent 7 years blaming him for their disastrous performance but today wants him back. It’s not normal”.