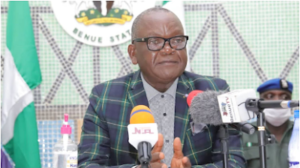 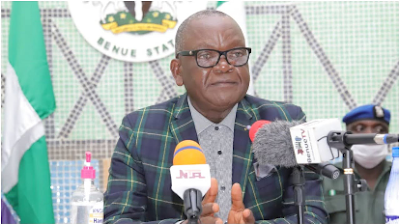 Governor of Benue State, Samuel Ortom has insisted that the law banning open grazing in the state is irrevocable just as he told the Miyetti Allah Kautal Hore that he is prepared to meet them in court for any legal battle.

Secretary-General of the group, Saleh Hassan at a press conference in Abuja on Monday, May 9th, 2022 threatened that they will take legal action against the Benue State Government over what he claimed were illegal seizures of cows belonging to their members on account of violation of the ban on open grazing of cattle in the state.

Governor Ortom in a swift reaction dismissed claims by the group that the cattle seized in the state by the Livestock Guards for violating the anti-open grazing law in the state were done illegally.

“There is a law in place. And it is very clear that anyone who allows his or her cattle to roam freely in the state violates the law. When such herds are seized by the Livestock Guards, a time frame is given for owners to come forward and claim. When the time given by law elapses, we are left with no option but to auction. And that is what has taken place.”

He stated that “As a state, we are law-abiding and we cannot allow lawlessness,” explaining that the law came into force in 2017 and was reviewed this year after it underwent every legislative process. “So anybody or group who violates it will bear the consequences.”

He stated: “We are prepared to meet them in court. The law is made to be obeyed so that we can have an orderly society. This law protects the interest of everyone irrespective of tribe or religion. It protects herders against rustling and also protects farmers who suffer the loss of their crops.”

Governor Ortom maintained that “Everyone is free to ply his or her legitimate business in this state in so much as they do not infringe on the provisions of this law against open grazing.”

The Governor said he will not compromise the security and welfare of all citizens and inhabitants in the state.