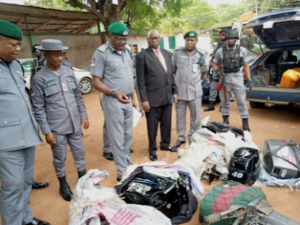 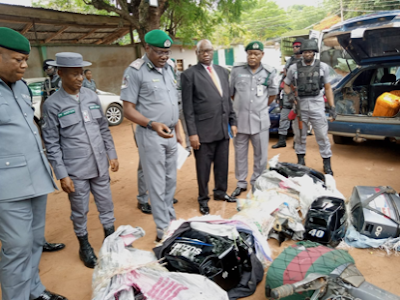 The boat engines, comprising five new ones and 14 fairly-used pieces of different brands are worth N17.322million.

The smugglers reportedly took to their heels as they were accosted by the immigration officers.

Addressing newsmen on Tuesday, the Customs Area Controller, Bamidele Makinde, disclosed on Tuesday at the command’s headquarters in Idiroko that the Ogun NCS in April generated N6,048,500.00 from auction sales of seized petroleum products.

Bamidele disclosed that a total of 4,603 bags (50kg) of foreign parboiled rice (the equivalent to eight trailer loads) were intercepted in April.

Other seizures include 2,195 pieces of foreign used shoes, 1,020 pieces/451 pieces of new/used ladies’ handbags, 89 cartons of foreign wine, 22 cartons of Noni Berry daily drink and 8 units of vehicles being used as means of conveyance.

According to him, the cumulative Duty Paid Value (DPV) of all the seizures in the month of April, amounts to N100,132,756.

He expressed optimism that the command’s revenue generation would improve significantly following the recent reopening of the border at Idiroko.

Bamidele cautioned that the land border reopening only allows the import and export of legitimate goods.

He said “I wish to reiterate here that our intelligence network in the command is continuously strengthened for an improved and efficient performance.

“We deploy intelligence in virtually all our operations in the area and greater successes are being recorded on a daily basis.

“Let me warn the criminal elements in the state that in whichever way and methods you plan your smuggling activities, we shall definitely uncover it, make seizures and arrests which could inflict gross financial injury on such perpetrators,” he said.