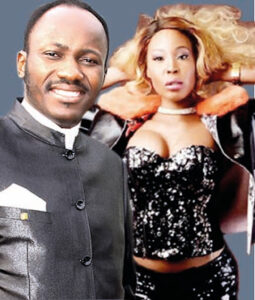 Otobo said she would not rest until she brings down Suleman over the losses she suffered for exposing the clergyman’s alleged immoral acts.

The Canadian-based Nigerian singer recounted how she lost some millions of naira and her singing career in Nigeria after Suleman arrested her.

In a series of tweets, Otobo alleged that her phone containing a song she was working on was seized a few days before she shot her music video.

According to Otobo, her arrest, which Suleman ordered, affected her musical career.

She also claimed to have lost over N3 million meant for her video shoot due to the controversy involving Suleman.

According to Otobo: “At Timaya’s home studio when I came to Nigeria in march 2017, I had a music collaboration with Timaya, paid him N3.5m. He hooked me up with Clarence Peters for the video shoot. We never released the song because Johnson Suleman arrested me 2 days prior the video shoot.

“The police that Suleman sent to arrest me took my phone, which the song was in, which also had more evidence of I and his romance history, all of these were to clean the tracks and silence me. But thank God I had some receipts saved in my iPad and Timaya’s pic was on IG.

“Just two days to my video shoot, I and my friend that linked me up with Timaya came down from Canada that month. This juju apostle locked the both of us for 3 days without bail.

She disclosed that Timaya never refunded her money and wasn’t ready to retake the song.

“Paid Clarence Peters N1.5m to balance N1m; he asked me to come to shoot whenever I’m ready tho. This was just the beginning of this Apostle Johnson Suleman going heartless on me because he wanted to do damage control of his dirty character. Didn’t even care what I went through.

“Till date, I didn’t get back my phone. If it wasn’t for my iPad, I wouldn’t have been able to save any receipts. I was supposed to have been blown in music by now. Unfortunately, I became famous for negativity.

“I want justice. Imagine all he’s cost me these years and no compensation. No justice, people have the wrong view of me. I won’t rest o.”

A few years ago, Otobo had accused Apostle Suleman of sleeping with her.

On Monday, Otobo returned to social media with allegations that Apostle Suleman was plotting to kill her.

Otobo posted screenshots of video calls and other intimate images she shared with the clergyman.

She dared Suleman to deny he is not the one in the photos.

The music artist vowed to release more videos of the cleric.

Reacting, Apostle Suleman said he is trending on social media because he called for an end to ASUU Strike.