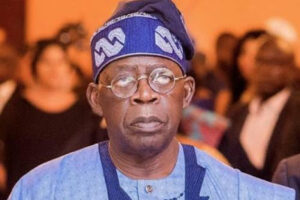 All Progressives Congress, APC, presidential aspirant, Senator Bola Tinubu has urged delegates of his party to give him the presidential ticket in the coming 2023 general elections assuring that there would be no contest between him and whoever emerges as the presidential candidate of the Peoples Democratic Party, PDP.

Senator Tinubu who spoke Tuesday while addressing delegates and stakeholders of the APC in Makurdi said he has the capacity and also well endowed to lead the country.

He stated that he was in the race to replicate what he did in Lagos state as Governor by building a united and prosperous Nigeria.

While rekindling the hope of Nigerians in the unity of the country, Senator Tinubu assured that his presidency would redirect the resources of the country and make it beneficial to every citizen.

He said: “I will bring the experience of my leadership in Lagos state as a Governor to bear on my leadership style in Nigeria when elected president of the country.

“And I guarantee you that I will run a transparent, open government as President. Nigeria is rich, what we need is to redirect our resources and channel them in the right direction.

“I urge you to give me the ticket because there will be no contest between me and whoever will emerge as candidate of the opposition PDP.”

Senator Tinubu urged Nigerian youths to entrust him with the leadership of the country assuring that he would meet their expectations.

Earlier, Senator Kashim Shetimma had recalled and extolled the leadership qualities of Senator JS Tarka who hailed from Benue state describing him as the leader and emancipator of the minority interest groups in Nigeria.

He said Senator Tinubu possesses such leadership qualities describing him as the right person to take Nigeria to the promised land.