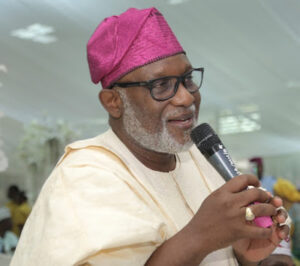 The Ondo State Governor, Mr. Rotimi Akeredolu, on Thursday, reiterated the call for restructuring of the country, saying it was the only way to the development of the country.

Akeredolu, who is also the Chairman of the Southern Governors Forum, stated this in a statement while reacting to the statement credited to Governor of Bauchi State and presidential aspirant of the Peoples Democratic Party, Dr. Bala Mohammed, on the Western Nigeria Security Network, also known as Amotekun, and on the need to restructure the polity for real development.

In the statement issued through his Chief Press Secretary, Mr. Richard Olatunde, Governor Akeredolu insisted that there was a need to put in place a system of administration that would reflect the devolution of powers.

The statement read, “The federating units must progress from the semblance of autonomy to the recognition of their unique features which justify their existence.

“All institutions must emerge as consequences of deliberative engagements designed to accommodate and serve all segments of the society. Social services become seamless and effective when governance is localised.

“It, therefore, becomes anomalous and suspicious to insist on a central command structure of policing the polity. Amotekun points to the path to tread in ensuring that collaborative efforts among security agencies yield maximum protection for the citizenry.

“It points at the ostensible potentials of a nation-state sincerely desirous of mobilising the citizens for the production of goods and services.

“We are proud of our modest intervention at a most auspicious moment in the country. We enjoin all patriots to look critically into the issues bordering on the challenges faced by the country as a result of the current system.

“Devolution of powers must be perceived as necessary for the development of the country. There can be no meaningful progress in a system where the federating units are treated as mere outposts for the central administration.”